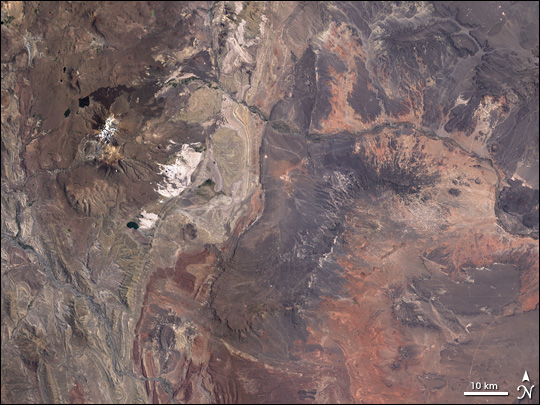 The Neuquén Basin in northern Patagonia, Argentina, has long been valued for its assorted treasures. The area has been tapped for its oil and gas reserves for years, but paleontologists have scoured the area looking for something else: fossils that would provide a window to this area’s past. In November 2005, a research team described a prehistoric creature whose fossil remains they found in the Basin. Unlike anything alive today, the 135 million-year-old, 13-foot-long crocodile had the head of a meat-eating dinosaur and the tail of a fish.

Landsat 7’s Enhanced Thematic Mapper Plus (ETM+) sensor captured this image of the Neuquén Basin on October 27, 2000. The Neuquén Basin is now a semiarid environment, evidenced by its earth tones ranging from beige to rust to deep brown. In the center right portion of the image, an array of tiny beige dots shows evidence of human activity—exploration for oil and gas in the form of wells. The rocks themselves, however, document the vastly different environment that existed in the area long before people arrived on the scene. The basin is characterized by sandstones, mudstones, and limestones laced with marine fossils.

Fossils of marine creatures on what is now dry land may sound a little strange, but during the Mesozoic (the Age of Reptiles, extending from about 248 to 65 million years ago), this basin was alternately flooded by both the Pacific and the Atlantic Oceans. Today’s rocks now bear evidence of animals that lived in the ancient watery depths. Fossils include mollusks, corals, and now-extinct marine reptiles like ichthyosaurs and plesiosaurs. As reported by National Geographic, a 1996 discovery added a uniquely odd creature to the basin’s menagerie. Eventually named Dakosaurus adiniensis and nicknamed Godzilla, the fossil crocodile sported an unusually short, robust skull and jaw, and big teeth serrated like steak knives. Zulma Gasparini of Argentina’s National University at La Plata and her collaborators announced the discovery in Science Express in November 2005.