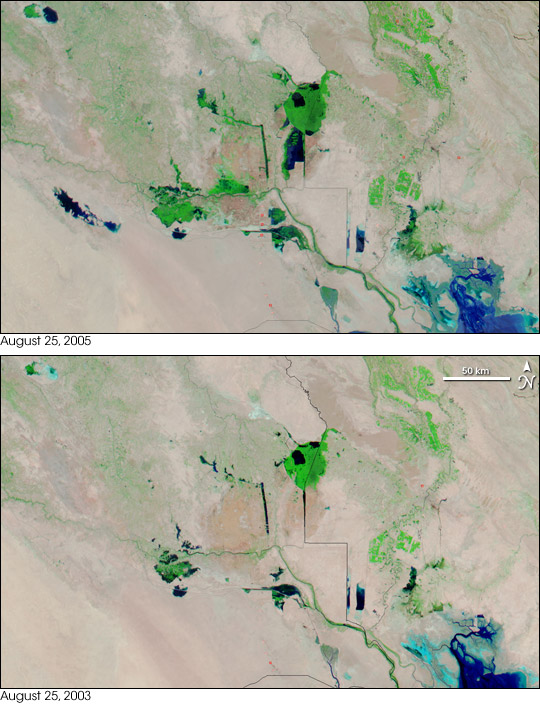 The Tigris and the Euphrates Rivers meet in a gentle “v” that cradled one of the most significant sites in western civilization: the Mesopotamian Marshes. Out of the reeds and mud between these two rivers rose some of the earliest cities of ancient Sumer, and for the next 5,000 years, the marshes have supported farmers and fishers who live simply, their culture changing little from generation to generation. An oasis amid the desert of the Middle East, the wetland was also a crucial habitat for millions of migrating birds.

These images, collected by the Moderate Resolution Imaging Spectroradiometer (MODIS) on NASA’s Aqua satellite, show changes in the marshlands over the past three years. In these false-color images, water is dark blue or black, except where sediment colors the water a pale blue, particularly in the northern tip of the Persian Gulf in the lower right corner. Vegetation is a vibrant green against the pale tan-pink sand of the desert.

The region changed significantly in recent years. In the 1990s, damming projects and canals diverted water from the marshlands, leaving them dry. By 2003, the marshlands, which covered up to 9,000 square kilometers in the 1970s, had all but vanished, spanning a scant 260 square kilometers. Since then, efforts have been made to restore the wetlands. In August 2005, the United Nations Environment Program (UNEP) reported that 37 percent of the wetland has now been restored to its former extent. During the spring floods, as much as 50 percent of the wetland had been inundated, but has since dried under the desert sun.

UNEP’s Iraq Marshlands Observation System is monitoring the return of water to the wetlands using daily MODIS imagery provided by the MODIS Rapid Response Team at Goddard Space Flight Center. The images show the changes to the region clearly, as can be seen in the above pair. In the top image, acquired on August 25, 2005, large pools of dark water have spread across a landscape that was dry on the same day in 2003. As water flows back into the wetland, the entire region has been suffused with green.

Tiny red dots in both images show where MODIS has detected a “hot spot”—an area far warmer than its surroundings. Normally, these hot spots are caused by fires, but in this case, they may be gas flares. The large images provided above show the scene in more detail, at MODIS’ maximum resolution of 250 meters per pixel.