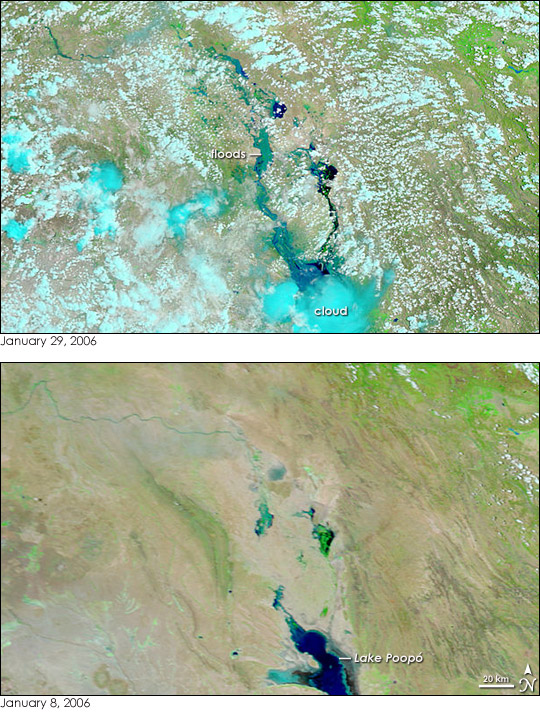 Widespread flooding raged across Bolivia during the final week of January 2006 after thunderstorms inundated the country with heavy rain. The Moderate Resolution Imaging Spectroradiometer (MODIS) on NASA’s Aqua satellite captured the top image of flooding in the southwestern desert on January 29, 2006. The floods appear to have turned this desert landscape into a sea of mud. In the false-color combination used to create these images, water is normally black or dark blue as Lake Poopó is in the lower image. But the flood water in the top image is pale blue, a sign that is it mixed with mud. Clouds are a brighter shade of blue and the desert landscape is pale tan with brushes of green vegetation.

At least 50 people died in floods occurring throughout the country, say news reports. The most severely impacted region is in the wetlands to the north of the area shown in this image, but La Paz, the nation’s capital, has also been affected. La Paz is just beyond the upper left corner of this image and is visible in the large images. The large images show additional flooding around Lake Titicaca, near La Paz.

A string of powerful rainstorms brought on widespread flooding throughout Bolivia from the final week of January through April 2006.