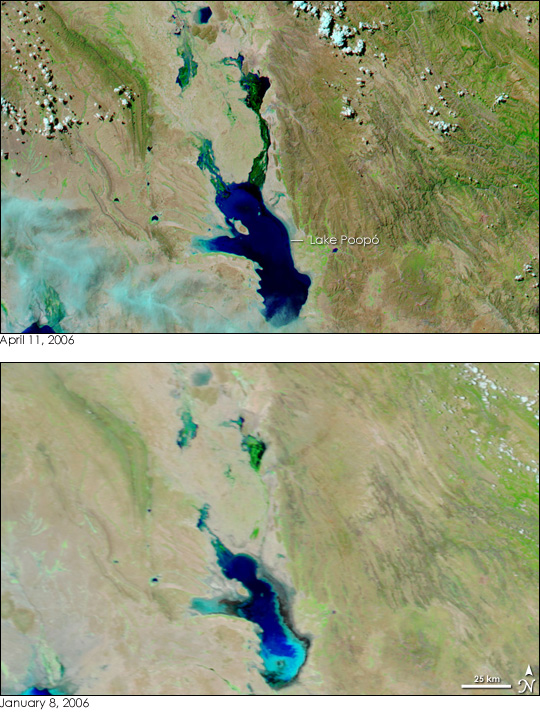 Bolivia’s worst rainy season in five years started in January 2006, and by April 11, rivers and lakes throughout the country were still swollen with the ongoing rain. The top Moderate Resolution Imaging Spectroradiometer (MODIS) image, taken by the Aqua satellite on April 11, shows flooding around Lake Poopó in southern Bolivia. In early January, before the rains began (lower image), the lake was smaller, surrounded by shallow salt flats. By April, deep blue water fills the lake to its shores. The waterway connecting Lake Poopó to the smaller lake to its northeast is wide where a small thin line defined it before. According to the Dartmouth Flood Observatory, 175,000 people were affected by floods throughout the country, and 100,000 were left homeless.

In these false-color images, water is dark blue or black, bare land is tan, vegetation is green, and clouds are pale blue. The large images provided above have a resolution of 250 meters per pixel. Daily images are available from the MODIS Rapid Response Team in a variety of resolutions and formats.

A string of powerful rainstorms brought on widespread flooding throughout Bolivia from the final week of January through April 2006.