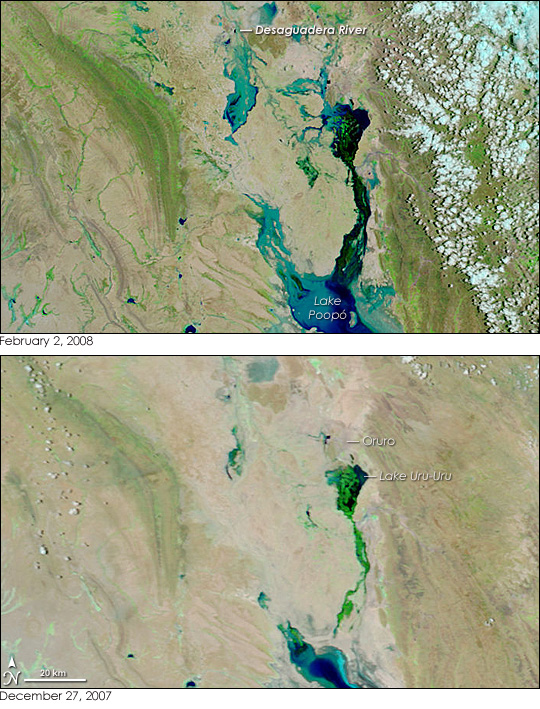 A month and a half of heavy rain pushed rivers across Bolivia over their banks. As of January 31, 2008, all nine regions in Bolivia were flooded, destroying crops and livestock, said the United Nations Office for the Coordination of Humanitarian Affairs. The floods, which started in mid-December after a month of rain, had claimed 40 lives by the end of January, reported the United Nations. The top image shows the floods in southern Bolivia on February 2, 2008. The lower image, captured on December 27, 2007, shows the region before the floods reached it. The Moderate Resolution Imaging Spectroradiometer (MODIS) flying on NASA’s Terra satellite captured the data used to make the images, which combine both visible and infrared light. Water is black in this sort of image, but shallow muddy pools over the bright salt flats are turquoise.

The images show the northern extents of Lake Poopó and the Desaguadera River, which feeds the lake. Lake Poopó, located in southwestern Bolivia, is a shallow lake whose size changes seasonally. At its fullest, the lake encompasses the smaller Lake Uru-Uru to its north. By February, the umbilical connecting the two lakes had grown as the flooded Desaguadera River poured water into the basin. The river branches into segments as it enters Lake Poopó, and many of the segments are swollen in this image. Nearly the entire length of the river from Lake Titicaca to Lake Poopó is flooded in the large image. Several smaller waterways in the region also contained more water than they had in December. The added water brought a brush of green vegetation to the tan-pink arid landscape. The floods shown in this image threatened three communities, but were not as damaging as floods elsewhere in Bolivia, according to the United Nations Office for the Coordination of Humanitarian Affairs.

Images of Bolivia are available from the MODIS Rapid Response System twice daily.