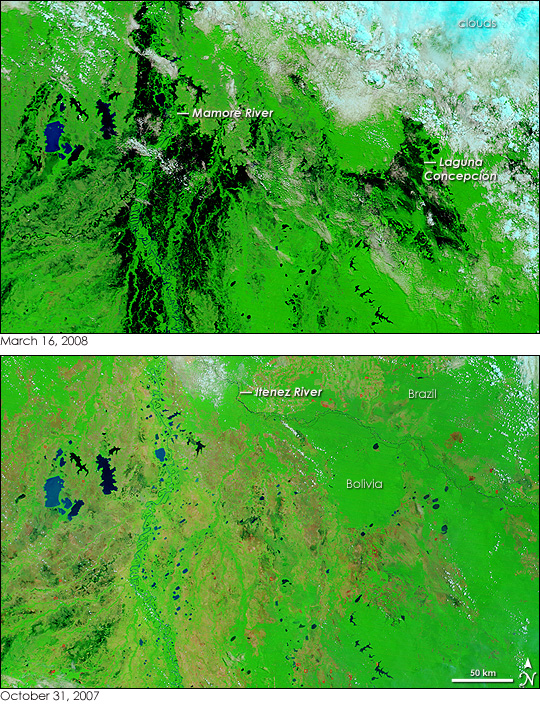 The floods that swept across Bolivia starting in December 2007 persisted into March 2008. The Moderate Resolution Imaging Spectroradiometer (MODIS) on NASA’s Terra satellite captured the top image of the floods in northern Bolivia on March 16, 2008. In some places, the floods had started to subside slowly, but others, such as low-lying areas along the northern border, were bracing for more severe flooding, reported the United Nations Office for the Coordination of Humanitarian Affairs on March 14. The lower image was taken on October 31, 2007, a short time before the intense rainy season began.

The influx of water paints the top image black. Water, blue to black in these false-color images, fills the wetlands around the Mamoré River and the Laguna Concepción. Traces of black surround the parts of the Itenez River that is visible through the clouds, hinting at the flooding forecast by the United Nations. A bank of clouds covers the landscape in the north. In this type of false-color image, made with both infrared and visible light, clouds are pale blue and white. Plant-covered land is bright green, and bare earth is tan. Red dots in the lower image mark fires, and newly burned land is brick red. As of March 14, the floods caused 71 fatalities and affected 94,000 families, reported the United Nations. The floods were expected to continue through April.