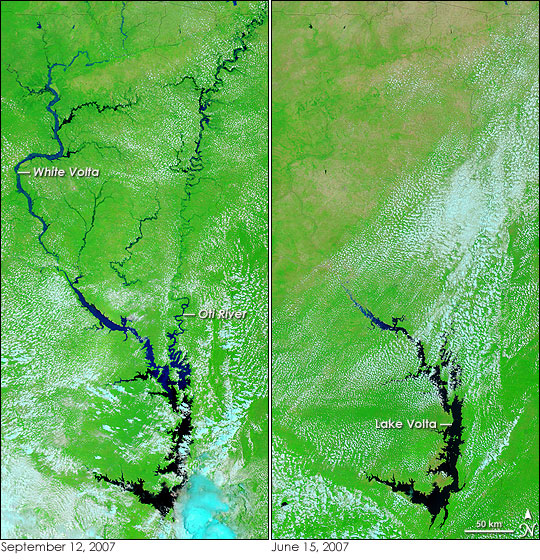 Of the 17 African countries plagued by floods in September 2007, among the most severely affected was the West Africa country Ghana. The Moderate Resolution Imaging Spectroradiometer (MODIS) on NASA’s Terra satellite captured the left image of Ghana on September 12, 2007. River systems throughout the length and breadth of the small country are swollen compared to conditions in June (left) before the rainy season started. The most flooded rivers are the White Volta and its tributaries. The Oti River, which flows into Lake Volta from the northeast, is also running high.

In both images, clouds blanket parts of the scene. The clouds are pale blue and white in these false-color images that combine both visible and infrared light. Water is black and dark blue, and plant-covered land is green. Bare earth or lightly vegetated land is tan.

The image encompasses most of Ghana, revealing just how extensive the floods were. Additional floods in Côte D’Ivoire, Mali, and Burkina Faso (north and west) and Togo (east of Ghana) are shown in the large image. Within Ghana itself, the flooding is most severe in northern Ghana, a region that had been dealing with drought earlier in 2007. As of September 17, more than 200,000 people had been displaced in northern Ghana and 22 had died, said the International Federation of Red Cross and Red Crescent Societies (IFRC). In addition to destroying homes and crops, the floods could bring waterborne disease such as cholera to the country.

Floods swelled rivers and saturated cropland through much of West Africa under the steady onslaught of wet-season rains in August and September 2007.