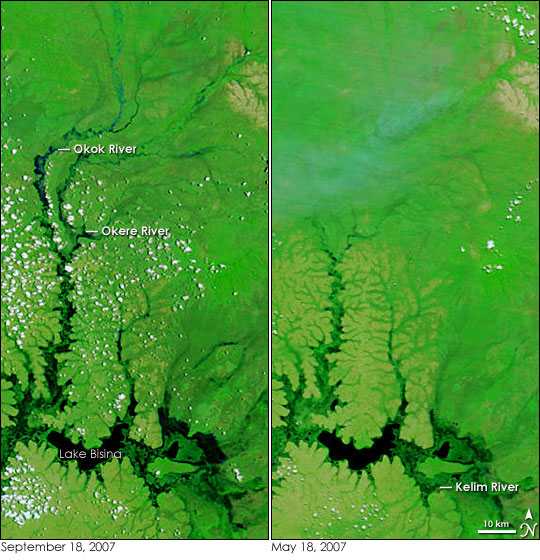 Flooded rivers in Central Uganda cut off access to some northern and eastern sections of the country in mid-September 2007, reported the Monitor, a Kampala (Uganda) news service, on September 18. Like many other countries in western, central, and eastern Africa, Uganda faced severe flooding as a result of unusually heavy rains from July through September. By September 18, the floods had killed at least 10 and affected about 300,000 people in Uganda, said the United Nations Office for the Coordination of Humanitarian Affairs (OCHA).

The Moderate Resolution Imaging Spectroradiometer (MODIS) on NASA’s Terra satellite captured this image of the most flooded part of Uganda on September 18. The image on the right was taken on May 18 and shows the region under normal conditions. The images were made with infrared and visible light to increase the contrast between water and land. Water is black or dark blue, and plant-covered land is green. Clouds are light blue and white.

Floods widen the rivers flowing into Lake Bisina in the September image. Water pools in the U-shaped bends of the Kelim River east of the lake, and the Okok and Okere Rivers to the north are swollen. Traces of black define smaller rivers that weren’t visible in May.

In addition to causing the floods shown here, the unrelenting rain destroyed up to 90 percent of the crops in some regions and caused many traditional mud-brick homes to collapse, said OCHA. The floods also contaminated water supplies, increasing the potential for an outbreak of waterborne diseases such as cholera.

Uganda was just of one many African countries that were flooded in September 2007. As many as 17 countries and more than a million people were affected by flooding across Africa, reported BBC News on September 17. Images of flood areas in Nigeria, Ghana, Senegal, Mali, and Sudan are available on the Earth Observatory. Daily images of Africa’s Sahel region, where the floods were concentrated, are available from the MODIS Rapid Response System.