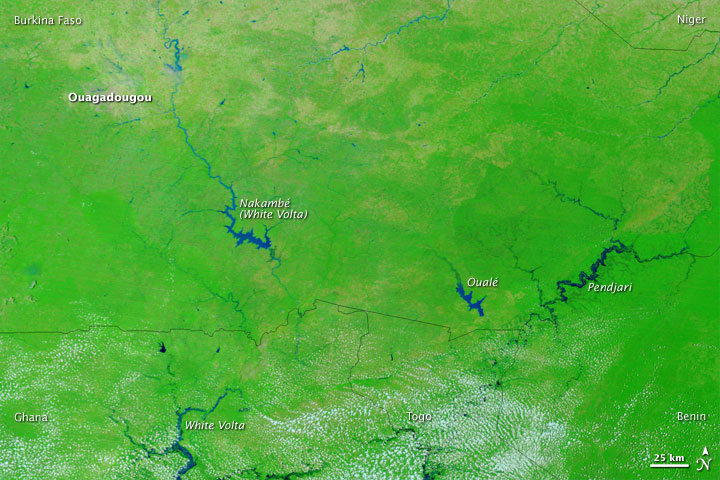 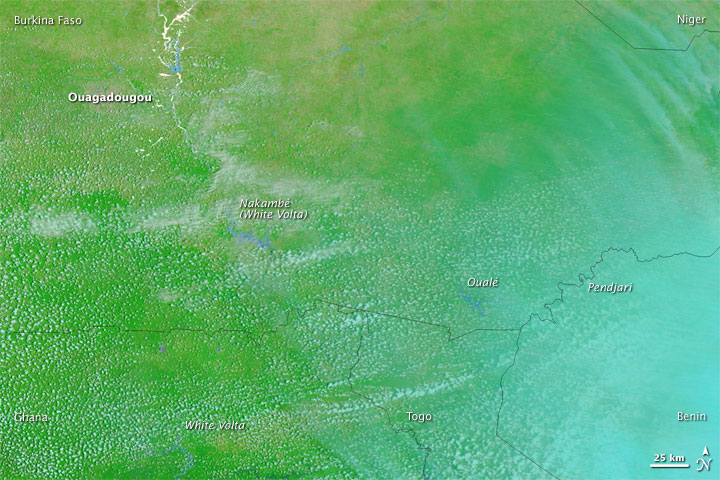 As of September 6, 2009, flooding in western Africa had displaced some 430,000 residents and claimed 70 lives, with the death toll expected to rise. Burkina Faso, Benin, Guinea, Niger, and Senegal all experienced severe flooding, and the UN warned that the flooding of 2009 could rival the devastating floods of 2007, which affected roughly 800,000 residents. In the floods of early September 2009, Burkina Faso was hardest hit, and in the capital city of Ouagadougou, the worst rain in 90 years flooded an estimated 24,000 homes, wiped out electricity, and washed away roads.

The Moderate Resolution Imaging Spectroradiometer (MODIS) on NASA’s Terra satellite captured these images of southeastern Burkina Faso and neighboring countries. The top image is from September 8, 2009, and the bottom image is from August 28, 2009. Both images use a combination of infrared and visible light to increase the contrast between water and land. Vegetation appears bright green, clouds appear bright turquoise, and water ranges in color from navy to electric blue.

Water channels that were barely discernible on August 28 glow bright blue on September 8. Swelling is apparent along the Nakambé, or White Volta, in Burkina Faso and Ghana. Floods have also swollen the Oualé and the Pendjari, which runs along the border between Burkina Faso and Benin.