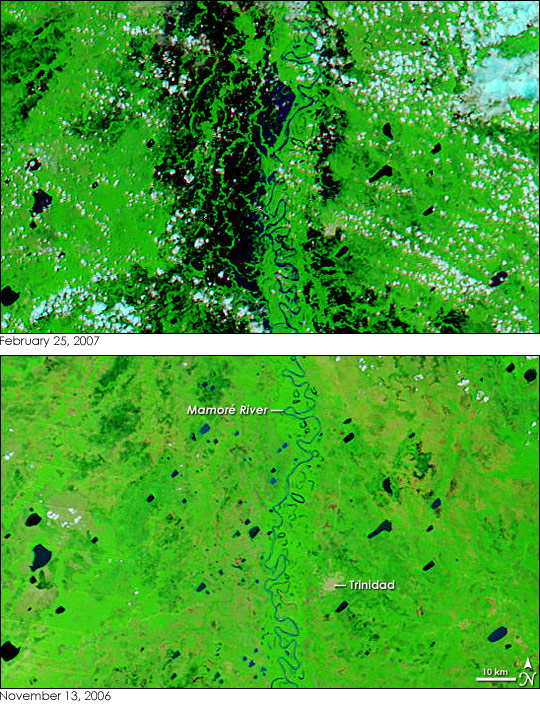 Persistent rain has fallen over Central Bolivia since December 2006, causing devastating floods and landslides. By February, several rivers had flooded, but the most serious flooding was along the Mamoré River. Widespread flooding was evident along the river when the Moderate Resolution Imaging Spectroradiometer (MODIS) on NASA’s Aqua satellite captured the top image on February 25, 2007. The water, black in this false-color image, which was made with visible and infrared light, fills in low-lying areas and wetlands on either side of the river. The river itself is also swollen, but a corridor of relatively dry land, bright green, separates it from the surrounding floods. The floods stretch hundreds of kilometers along the length of the river, as shown in the large image.

The floods have caused at least 35 deaths and are being called the worst floods to strike Bolivia in 35 years, reported the BBC on February 26. The floods have surrounded the regional capital city of Trinidad, which is tan in the image. About 90,000 people are stranded in the city, reported BBC News, and the city may have to be evacuated if water rises over a protective dike.

The floods have affected a wide area beyond Trinidad. The land around the Mamoré and other central and eastern Bolivian rivers is important for agriculture. The Food and Agriculture Organization (FAO) of the United Nations estimated that the floods have destroyed about 70,000 hectares of food and cash crops and more than 11,000 head of cattle as of February 23. FAO expects that the region will face food shortages as a result of the floods. Daily images of the floods are available from the MODIS Rapid Response Team.