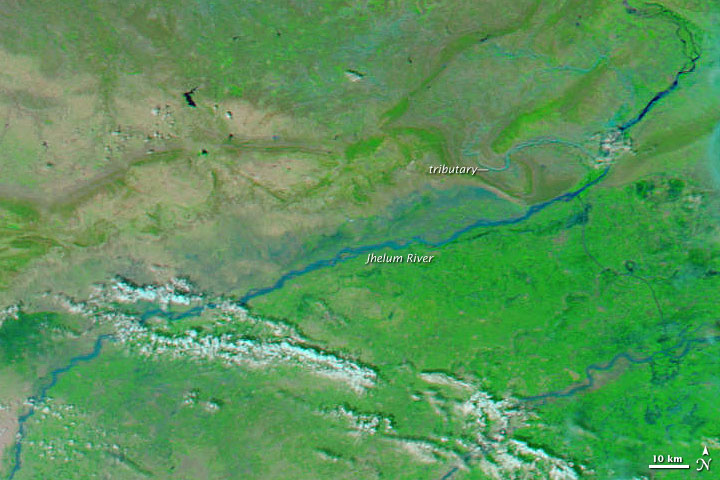 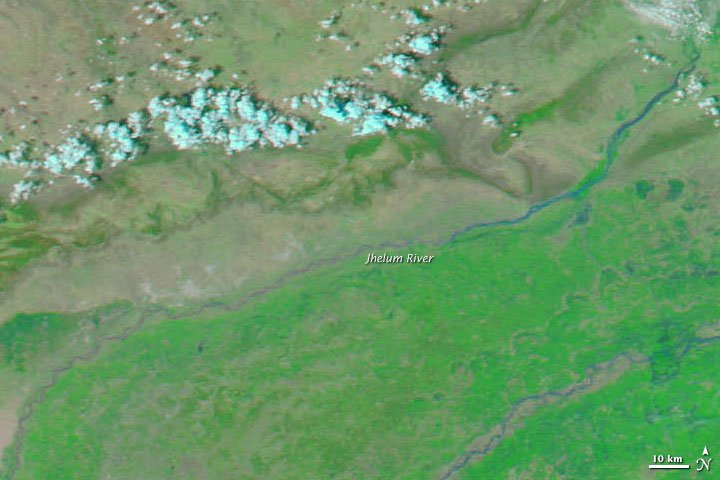 Floods struck northwestern Pakistan in mid-August 2009. In the country’s Swabi district, some 70,000 to 80,000 people were affected as floods destroyed homes, killed livestock, and swept away stored grain. According to an August 18 news report, the human death toll stood at 27 and was expected to rise.

The Moderate Resolution Imaging Spectroradiometer (MODIS) on NASA’s Aqua satellite captured the top image on August 18, 2009, and the bottom image August 13, 2009. Both images use a combination of infrared and visible light to increase the contrast between water and land. Vegetation appears bright green, clouds appear bright turquoise, and water ranges in color from navy to electric blue. These images show part of the Jhelum River, southeast of the city of Swabi. In contrast to the image acquired five days earlier, the August 18 image shows the expanse of swollen river in shades of blue. The later image also shows a bright blue tributary—barely discernible in the earlier image—connecting with the Jhelum River in the northeast.

According to the U.N. Office for the Coordination of Humanitarian Affairs, a common agricultural practice in this area is to store six months’ worth of wheat or dry rations. The loss due to the floods could lead to food insecurity in the region. Immediate deaths from the floods appeared to result from collapsing roofs as floodwaters moved through villages.

Acquired on August 8, 2010, and July 18, 2010, these false-color images show a dramatic difference in water levels along the southern extent of the Indus River, midway through Pakistan’s monsoon season.