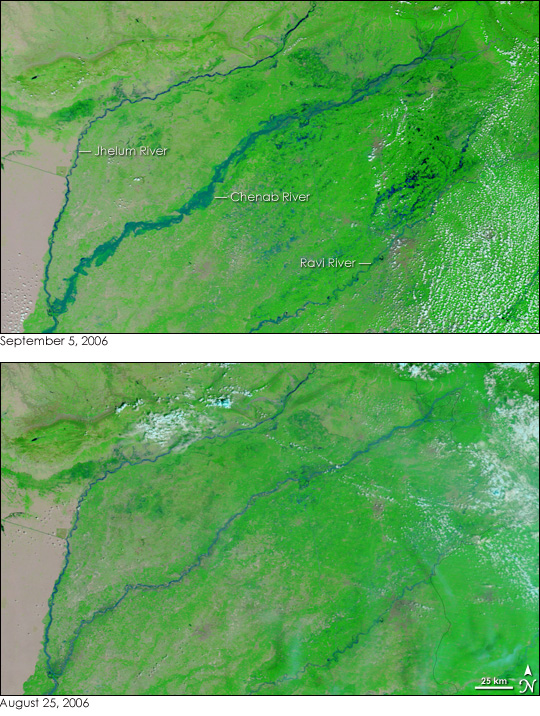 Even as the summer monsoon season was drawing to a close, the rivers of eastern Pakistan flooded once again in early September 2006. Unusually heavy monsoon rains starting in May triggered floods throughout southern Asia during the summer of 2006, and India and Pakistan were among the hardest hit. In Pakistan, floods during August caused further devastation in the northeast, a region still recovering from a massive earthquake in October 2005. Though the August floods had subsided by August 25 (lower image), a fresh round of flooding filled rivers in the east in early September.

The Moderate Resolution Imaging Spectroradiometer (MODIS) on NASA’s Terra satellite captured the top image of flooding along the Chenab River on September 5, 2006. Both the Chenab and the Jhelum flow out of the Himalaya Mountains in Kashmir, where heavy rains caused flash floods and landslides during the first week of September. Floods in Pakistan’s Punjab state, the area shown in these images, killed 20 and inundated 200 villages, said the Dartmouth Flood Observatory.

These images were created with infrared light to create more contrast between water and land. In this type of image, water is black or dark blue, but appears lighter when it is clouded with sediment. Plant-covered land is bright green, while barren or sparsely vegetated land is tan. Clouds are turquoise blue and white. A photo-like, true-color version of these images is available from the MODIS Rapid Response Team.