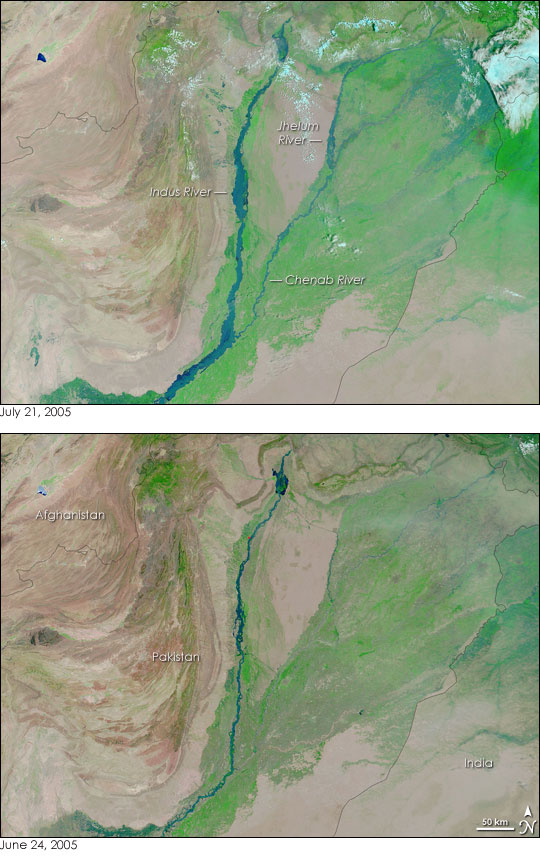 Rivers across Pakistan were grossly swollen on July 21, 2005, when the Moderate Resolution Imaging Spectroradiometer (MODIS) on NASA’s Terra satellite captured the top image. A combination of monsoon rains and high temperatures have caused these floods. The rivers were already running high after a heat wave sent torrents of melted snow out of the mountains of northern Pakistan and India, when monsoon rain started pounding the country in early July. The taxed rivers pushed beyond their banks.

In the top image, The Indus, Jhelum, and Chenab Rivers are all flooded when compared to conditions on June 24, 2005, lower image. The land near the Indian border (upper right corner), where a series of canals link small rivers, appears to be entirely covered with dark blue water. Clouds, which are light blue and white, partially obscure these floods.

The United Nations Office for the Coordination of Humanitarian Affairs reports that 29 people have died in Pakistan’s Punjab province, the region shown in the images, since the floods began. At least 452,000 people have been affected by the flooding, with farm communities along the Indus River being particularly hard hit.

To track these floods, see the daily images generated by the MODIS Rapid Response Team.

Both monsoon rains and quickly melting snow have pushed rivers across Pakistan over their banks.