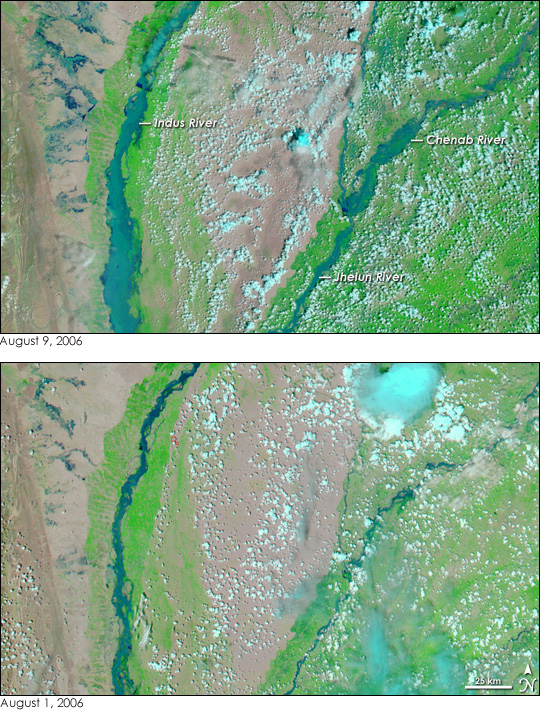 Summer floods are common in Pakistan. The season brings drenching monsoon rains that swell rivers and streams across the country. But in the summer of 2006, the rains fell on unstable soil, triggering fresh landslides where a powerful earthquake had weakened mountainsides in October 2005. In addition to causing landslides in the quake region, the heavy rain flooded many of the rivers that run roughly north-south down the length of Pakistan.

When the Moderate Resolution Imaging Spectroradiometer (MODIS) on NASA’s Terra satellite took the top image on August 9, 2006, the Indus River, Jhelun River, and Chenab River were running high. Between August 9 and August 1, lower image, the Indus River had expanded several kilometers. The small rivers running out of the Sulaiman Mountains to the west of the Indus are also swollen, as are the Indus’ larger tributaries, the Chenab and the Jhelun to the east. Additional flooding is visible throughout the country in the large image. The United Nations Office for the Coordination of Humanitarian Affairs reported on August 10 that more than 200 people had died in the floods since the rains began in mid-July. Monsoon flooding has also impacted Pakistan’s neighbors, India and Afghanistan.

These images are shown in false color to highlight the presence of water. The mud-laden water is light blue, while clouds are pale turquoise and white. Vegetation is bright green, and bare or sparsely vegetated ground is pink and tan. Fires are outlined in red. The large images provided above are at MODIS’ maximum resolution of 250 meters per pixel. The MODIS Rapid Response Team provides daily images of Pakistan and the surrounding region.