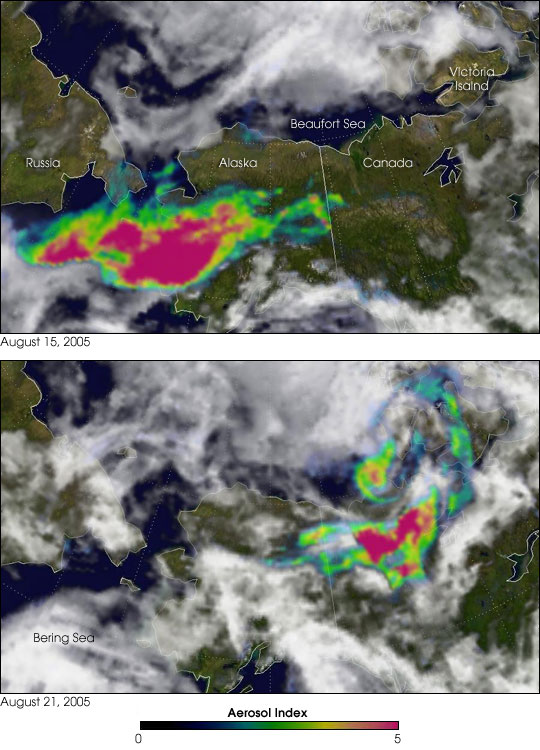 In the third week of August 2005, an area of high atmospheric pressure built up over Alaska. Large areas of high pressure often lead to calm weather, with light (or absent) surface winds. Unfortunately for Alaska residents, the high pressure system that parked over the state coincided with a period of significant fire activity, with more than a hundred forest fires churning out thick smoke. For several days the smoke piled up over the Interior leading to hazardous air quality warnings for many areas.

This pair of images from the Ozone Monitoring Instrument (OMI) on NASA’s Aura satellite shows smoke measurements over Alaska and western Canada on August 15 (top) and August 21 (bottom). (The background for the image is NASA’s Blue Marble.) Increasing amounts of smoke are shown as an aerosol index with shades of blue (little or no smoke) to dull red (thick smoke). On August 15, a large mass of smoke had drifted westward over the Interior and spread out over the Bering Sea toward Russia. Less than a week later, the weather patterns shifted and the smoke blew to the east and north, over Yukon Territory in western Canada and over Victoria Island toward the Arctic Ocean.

Smoke contains many substances, including carbon dioxide, carbon monoxide, water vapor, and particulate matter. OMI measures smoke by tracking black carbon particles, or soot, that absorb ultraviolet (UV) radiation, the wavelengths of sunlight that cause sunburns. By measuring how much UV radiation the soot absorbs, OMI provides estimates of the amount of black carbon aerosol in the smoke layer. This method of detecting aerosols based on their interaction with UV rather than visible (rainbow) light allows OMI to measure absorption by black carbon in smoke even if the smoke is mixed with or floating above clouds. Measurements of how much radiation aerosols absorb are important for scientists trying to calculate the net effect of aerosols on Earth’s energy budget and climate.

OMI was added to NASA’s Aura satellite as part of a collaboration between the Netherlands Agency for Aerospace Programs and the Finnish Meteorological Institute. The sensor tracks global ozone change and monitors aerosols and pollution in the atmosphere.

By mid-August 2005, 584 fires had burned more than 3 million acres in Alaska. Air quality reached "very unhealthy" to "dangerous" levels as smoke pooled in the Interior.