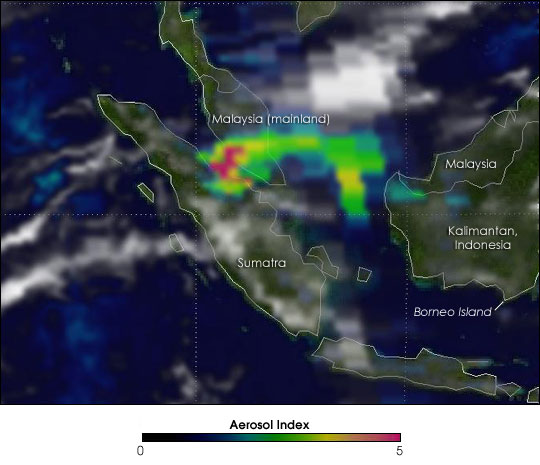 Out-of-control fires burning on the eastern shore of Sumatra (image center) created an air quality emergency for neighboring Malaysia in early August 2005 as smoke shrouded parts of the country. The smoke hung thickly over Malaysia’s busy capital, Kuala Lumpur, where it forced businesses, schools, and transportation to close. This image, created using data collected by the Ozone Monitoring Instrument (OMI) on NASA’s Aura satellite, shows the density of the smoke on August 10, 2005. Red-colored areas show where smoke was thickest.

The densest smoke hangs over the Strait of Malacca, between Sumatra and mainland Malaysia to the northeast. Winds in this region often blow from the west, spreading smoke from burning peat swamp forest in coastal Sumatra toward the east. The thickness of the smoke tapers off to mostly green and blue values between mainland Malaysia and the island of Borneo, farther east. A less intense smoke plume is located on the west coast of Borneo, coming from a much smaller collection of fires. Perhaps it is the combination of these two sources of smoke—Sumatra and western Borneo—that gives rise to the yellow (higher values) area between the Borneo and the mainland.

Smoke contains many substances, including carbon dioxide, carbon monoxide, water vapor, and particulate matter. OMI measures smoke by tracking black carbon particles, or soot, that absorb ultraviolet (UV) radiation, the wavelengths of sunlight that cause sunburns. By measuring how much UV radiation the soot absorbs, OMI provides estimates of the amount of black carbon aerosol in the smoke layer. This method of detecting aerosols based on their interaction with UV rather than visible (rainbow) light allows OMI to measure absorption by black carbon in smoke even if the smoke is mixed with or floating above clouds. Measurements of how much radiation aerosols absorb are important for scientists trying to calculate the net effect of aerosols on Earth’s energy budget and climate.

OMI was added to NASA’s Aura satellite as part of a collaboration between the Netherlands Agency for Aerospace Programs and the Finnish Meteorological Institute. The sensor tracks global ozone change and monitors aerosols in the atmosphere.