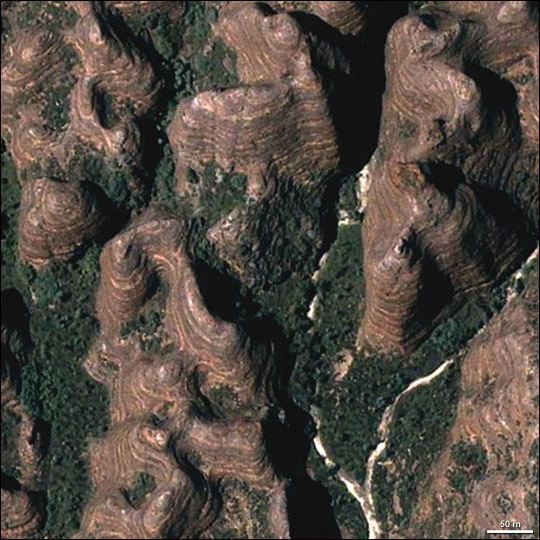 The orange and black towers of rock rising above deep green forest are almost as strange as their name: the Bungle Bungle Range. Familiar to Aboriginal Australians for centuries, or perhaps millennia, most Europeans knew nothing of the Bungle Bungles until the 1980s, when they became part of the Purnululu National Park in northwestern Australia. The mountains rise 200 to 300 meters above a forest and grass plain in the Kimberley, a section of Western Australia.

Water is responsible for both the whimsical shape and colorful banding of these mountains. The beehive-shaped mounds are made of sandstone and other conglomerate rocks, deposited in the area by the meandering braids of ancient rivers. Faults pushed the rocks up to their current height, but water continued its work on the land. Water cuts between the peaks, wearing the soft sandstone away so that deep gorges and small gullies separate the rounded peaks. The deepest such gorge was formed where the Piccaninny Creek flows through the range.

Water has also created the colorful bands that circle the Bungle Bungles. Where layers of the rock are soft, water seeps in, allowing dark algae to grow in black bands. The orange bands are made by a thin layer of iron and manganese, which coats layers of the rock, making them less permeable to water.