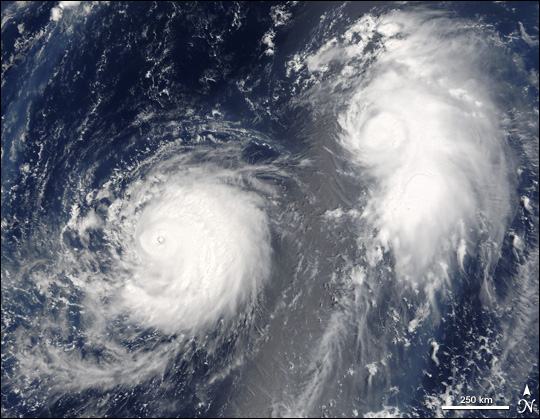 Typhoon Mawar (left) is posing photogenically with Tropical Cyclone Guchol in this satellite image. Both storms are far out in the northwestern Pacific Ocean, some 900 kilometers from Tokyo. They are traveling in parallel with each other, both headed roughly northwest at comparable speeds. Mawar, however, will strike mainland Japan on its projected course, and will have built to a Category 4 storm with sustained winds of over 320 kilometers per hour (200 miles per hour) as it strikes shore around August 25. Guchol, however, will never come close to shore if current projections are correct, and will remain a substantially weaker system with peak winds less than half the speed of Typhoon Mawar.

The large image provided above has a resolution of 250 meters per pixel. It is available in additional resolutions from the MODIS Rapid Response Team.

Typhoon Mawar is a strong typhoon in the northwestern Pacific. The storm was predicted to make landfall on Honshu (the main island of Japan) on August 25, with Category 4 strength winds and heavy rainfall.