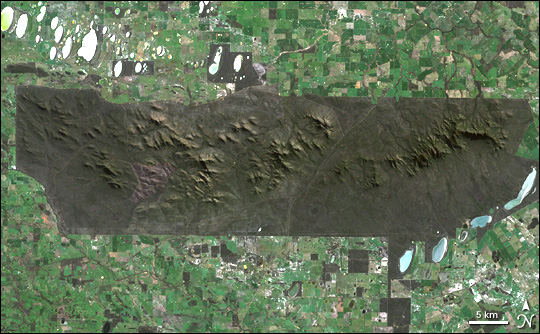 The Stirling Range National Park in the southwestern corner of Australia forms a rare patch of deep green, wooded hillsides and parkland in an area dominated by checkerboard plains of agricultural land. The Stirling Range reaches as high as 1,095 meters (3,600 feet) above sea level at Bluff Knoll, the tallest peak for a thousand kilometers or more in any direction. The range extends for some 65 kilometers, virtually all of it encased within the park named for the range.

This Landsat 7 image shows the dramatic imprint of wide-scale agriculture in sharp contrast to the natural and essentially unaltered state of natural affairs within the park. The sharp boundaries on all sides of the park show where agriculture immediately gives way to protected land. The range has a wrinkled-elephant-skin look from the satellite perspective, a characteristic of landscapes where gradual erosion rather than uplift has shaped the mountains in the landscape. The park runs along the east-west trending mountain range, and it is split in two by one major access road running from the coastal town of Albany up to Borden in the north. The irregularly shaped edge on the southwestern end of the park is where the boundary is not an arbitrary straight line but instead a branch of the Kalgan River, which is fed in large part from precipitation falling in the western half of the range. The slightly more distinct peaks east of the road reach up to the triangular-shaped high point of Bluff Knoll. The landscape around the edge and beyond the park is also dotted with slivery-blue, shallow lakes.

The rocks of the Stirling Range are generally sedimentary rocks such as shale and sandstone, which were laid down and compressed into stone millions of years ago. These rock formations resisted erosion more effectively than surrounding land, so the mountains grew up as the land around them washed away. Because the range is significantly higher than the land around it, it has formed an ecological island on its slopes. Plant species have been isolated from related cousins and evolved apart over time. There is greater diversity of species in this small park than in all of the British Isles, and some 85 species of plants are endemic to the area (found nowhere else on Earth).

As the only vertical obstacle to weather in any direction, the range also tends to alter weather patterns around itself. Its upper slopes receive significantly more rainfall than surrounding areas.

The Enhanced Thematic Mapper Plus (ETM+) instrument on Landsat 7 acquired this scene on August 14, 1999. This natural-color composite was created by combining red, green, and blue wavelength data (ETM+ bands 3, 2, & 1).