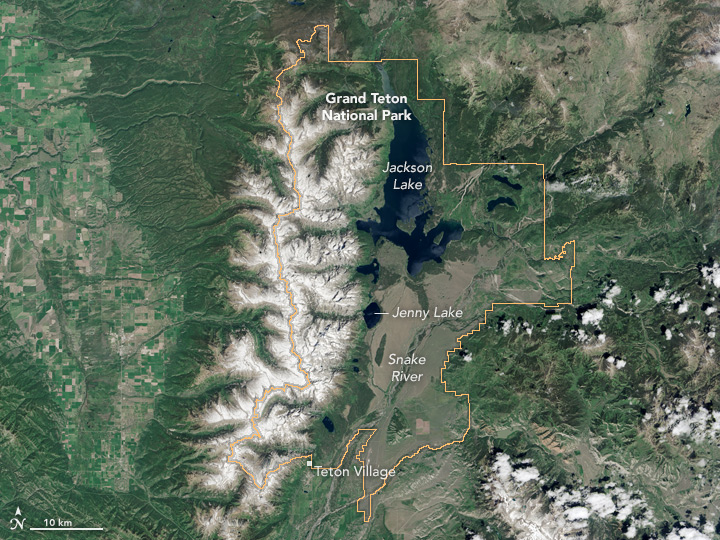 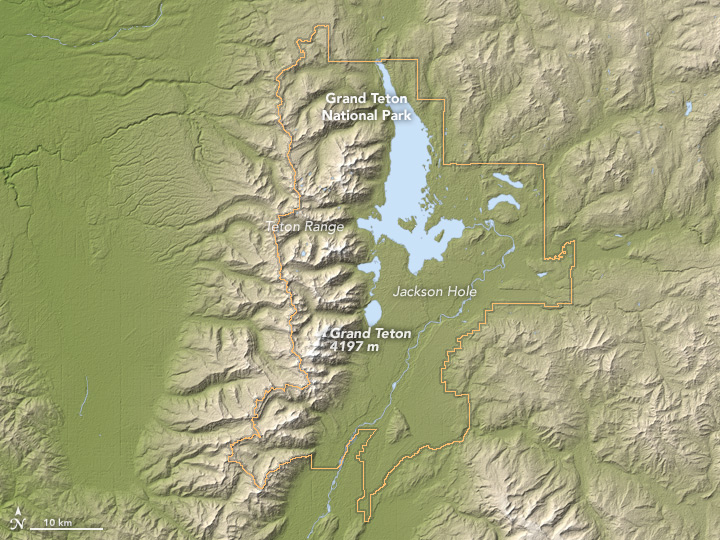 The iconic, stark peaks of the Teton mountain range in northwestern Wyoming draw mountaineers and climbers from around the world. The eastern side of the range, and the Jackson Hole valley more than a mile below, make up Grand Teton National Park.

The Operational Land Imager (OLI) on the Landsat 8 satellite acquired this natural-color image (top) of the park on June 15, 2015. These 310,000 acres form the southern extension of the Greater Yellowstone Ecosystem.

In wintertime, the area is almost completely covered with snow. When this image was acquired in late spring, only the higher elevations were capped with white. Snowmelt feeds area’s numerous lakes and streams, and water features (kettle ponds, springs, lakes, and streams) cover 10 percent of the park’s surface. Most prominent in the view from space are Jackson Lake, Jenny Lake, and the Snake River—the main drainage for the park and surrounding watershed.

Also prominent is the sharp relief of the mountain range, which is demonstrated by the map of elevations throughout the park. The summit of Grand Teton rises to 4,197 meters (13,770 feet) above sea level, about 2,100 meters (7,000 feet) above the flat expanse of Jackson Hole valley. The absence of foothills adds to the dramatic transition from valley to mountain range, visible in the ground-based photograph below. 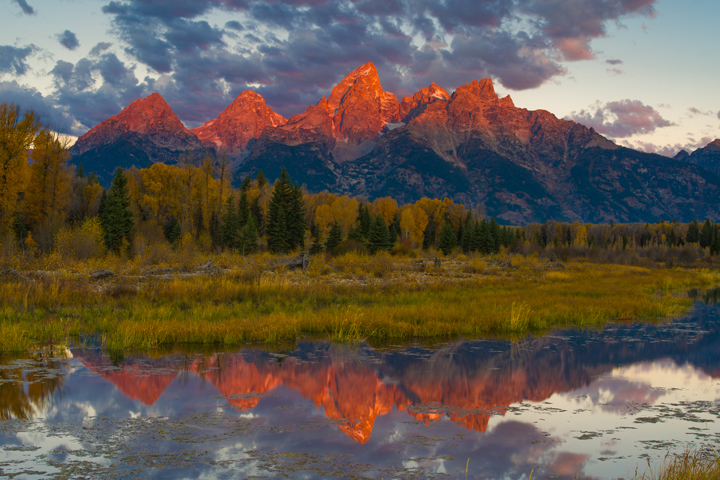 The actual displacement between the two blocks of land that that formed the valley and mountain range goes much deeper. About 10 million years ago, Earth’s crust started to stretch and thin, forming faults and causing earthquakes. Over time, the block of earth west of the Teton fault shot upward, forming the Tetons, and the block of earth east of the fault dropped more than 6,000 meters (20,000 feet) forming the valley. The process is demonstrated in this two-minute animation.

While the mountains were building and valley was sinking, fire and ice were sculpting the landscape. Volcanic ash blew into the area and accumulated in a layer almost one mile thick. Lava from what is now Yellowstone Park flowed south around both sides of the range. And glaciers advanced and retreated, most recently when ice carved out Jackson Lake about 20,000 years ago.

The Teton Range was set aside as a National Park in 1929 after decades of contention with local ranchers and other land interests. At the time, the park only included the Teton Range and glacial lakes at their base. The area around Jackson Lake, including national forest and other federal lands, were declared as a national monument in 1943. The park and monument were merged—and a 35,000-acre parcel was donated by John D. Rockerfeller, Jr.—to form the current Grand Teton National Park in 1950. 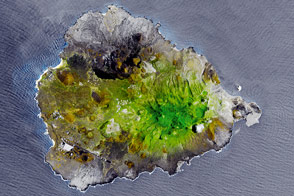