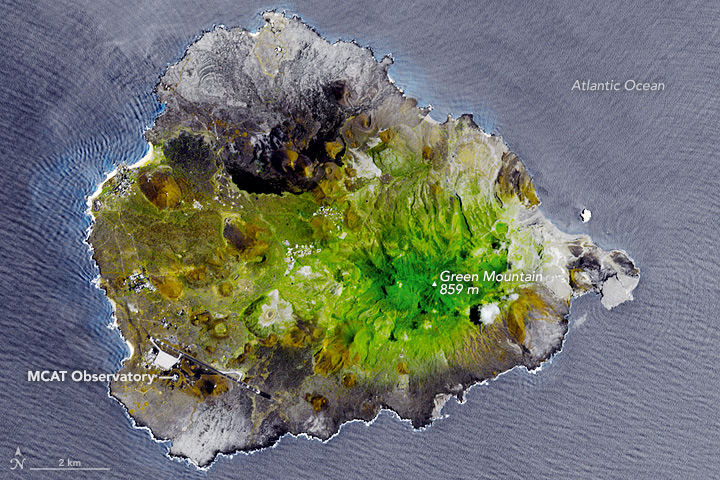 When Charles Darwin first visited Ascension Island in 1843, he was confronted by what seemed to be a barren volcanic wasteland. The coasts were dominated by geologically young basalt that had little or no vegetation growing on it. (Basalt is a dark-colored, fine-grained rock that forms when certain types of lava cool quickly after an eruption.) The highlands in the interior were greener, but not by much. Small ferns and grasses eked out a living, but trees were completely absent.

After setting up a base in 1815, British marines had established a vegetable garden on Green Mountain, the highest peak on the island. But it was not until a few decades later that Joseph Hooker, a botanist and friend of Darwin, launched a concerted effort to put the green into Green Mountain.

Beginning in 1847, Hooker arranged for trees and shrubs to be shipped to the island en masse. His goal was to establish forests on the mountain that would capture and retain moisture, amplify rains, improve the soil, and ultimately make Green Mountain and the rest of the island more hospitable to plant life. The experiment proved remarkably successful.

As seen in this simulated natural-color image, vegetation now thrives on Green Mountain and much of the rest of the island. The most densely vegetated areas—the forests at the top of the mountain—appear dark green; less densely vegetated areas are light green. Areas with little or no vegetation are brown and black. Buildings are white. The Advanced Spaceborne Thermal Emission and Reflection Radiometer (ASTER) image on NASA’s Terra satellite acquired this image on March 11, 2010.

Grasses, shrubs, and thorny mesquite plants live at the relatively dry base of the mountain. At elevations between 330 and 600 meters (1,080 feet and 1,970 feet), increasing moisture makes it possible for prickly pear and acacia to survive. In a misty zone above 600 meters, bananas, juniper, ginger, bamboo, fig, yew, pine, raspberry, and many other plants and trees grow in abundance.

Ascension Island also holds an interesting place in NASA history. In 1967, the agency established a tracking station for Apollo and other spaceflight programs. Later, the lengthy runway at the island’s airstrip became a backup landing site for the space shuttle. Most recently, NASA installed a Meter Class Autonomous Telescope (MCAT) near the airstrip. The powerful optical telescope is used to track orbital debris that could pose a risk to spacecraft.

An English botanist on the Beagle led the transformation of barren Ascension Island into something much greener. 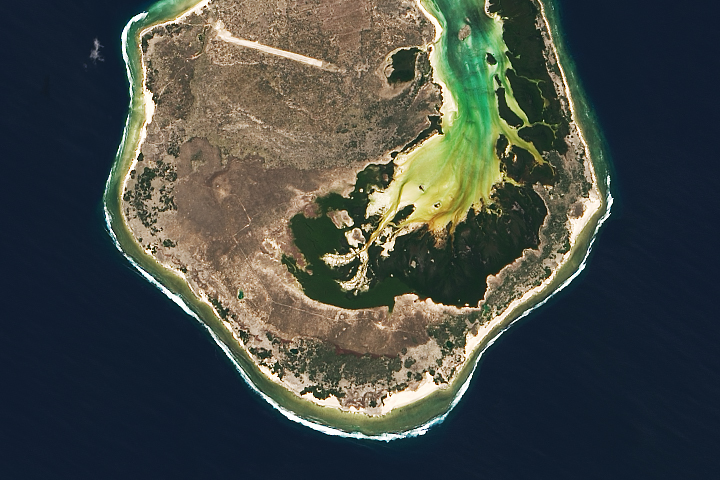 The small coralline island between Madagascar and Mozambique is a haven for nesting seabirds and green sea turtles.