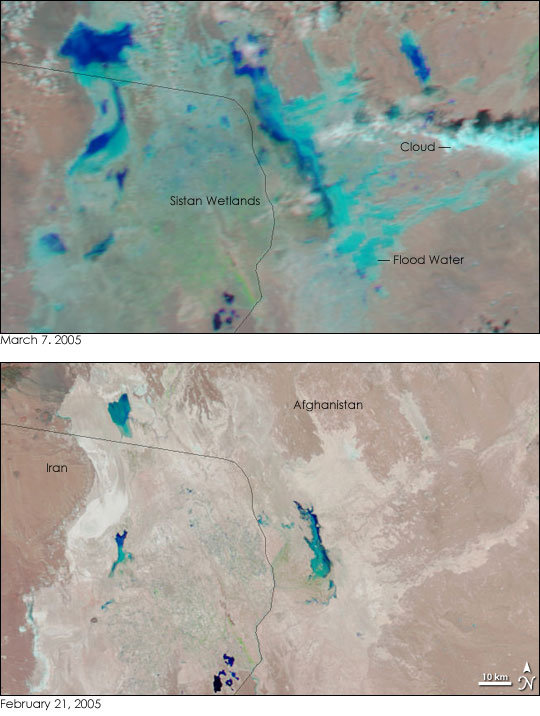 Already bracing for severe floods after the most arduous winter in a decade, Afghanistan has been flooded by heavy rains. The saltpan plains—once the Sistan Wetlands—of western Afghanistan and eastern Iran are filling with water. In the two week period that passed between February 21, and March 7, 2005, this border region went from arid plain to water-soaked wetlands. According to Agence France-Presse (AFP), the floods have killed three people and destroyed about 300 houses in Afghanistan. Officials fear that flooding could intensify as temperatures rise and winter’s snow begins to melt.

The Sistan Wetlands have been steadily drying out in the grip of an extended drought that started in 1998. (See “From Wetland to Wasteland”) The former extent of the wetlands is visible in the lower image, taken by the Moderate Resolution Imaging Spectroradiometer (MODIS) on NASA’s Aqua satellite on February 21. Evaporating water left white salt flats, which are a lighter shade of tan in this image. The top image, taken by MODIS on the Terra satellite, shows that flood waters have filled the depressions left by the former wetlands.

The images are shown in false color and combine both near infrared and visible light. In this color combination, the tan desert soil has a slightly pink tint, clouds are light blue, plant-covered regions are bright green, and clear water is black. Because dirt scatters light, it colors the water blue. Clearer, deeper water is a dark shade of blue, while shallow, mud-laden water is lighter blue. Beyond causing wide-spread floods, the rain has spurred plant growth, particularly in Iran, where the wetlands are considerably greener on March 7.