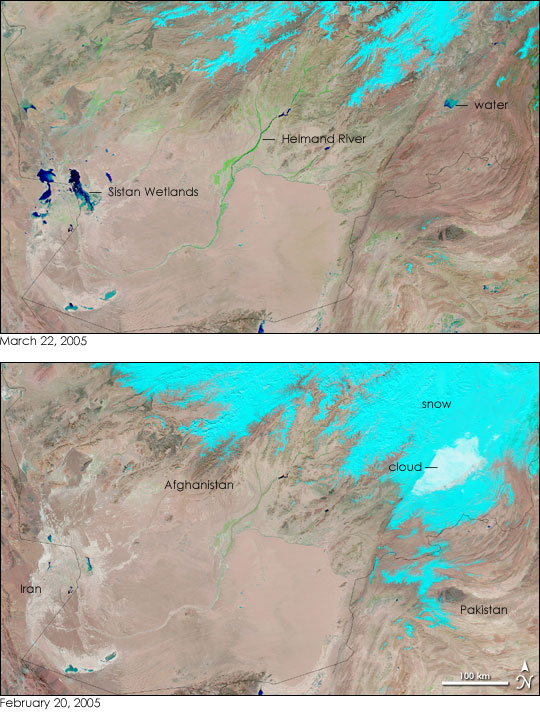 After a harsh winter in which more than 300 died in the extreme cold and heavy snow, spring is finally coming to Afghanistan. As welcome as the warmer temperatures might be, the change of the season has also brought additional catastrophe to the country. Both rain and melting snow have trigged widespread flooding in Afghanistan's central mountains and western provinces. Multiple media reports say that more than 200 have died in the floods.

On March 22, 2005, the Moderate Resolution Imaging Spectroradiometer (MODIS) on NASA's Terra satellite caught a cloud-free view of the flooded regions. The image, shown above in false color to highlight the presence of water, reveals water throughout the deserts of western Afghanistan. Clear, deep water is darker blue, while shallow, mud-laden water is lighter blue. In contrast to the lower image acquired on February 20, splotches of blue in varying shades cover the region, particularly near the Iranian border. It is not difficult to see where the additional water came from--the snow that blanketed central Afghanistan on February 20 (shown in light blue) had largely melted by March 22.

To date, the largest loss of life has occurred along the Helmand River, which runs through the center of the image. A faint blue line of water (more easily visible in the large image) shows that more water fills the river on March 22 than on February 20, when the river was defined only by the green vegetation that lines its banks. Additional damage has been incurred in the region around the Sistan Wetlands, where water is filling the saltpans left by the desiccated wetland. Further signs of flooding are reflected in the plants that are springing up in response to warmer temperatures and the spring run-off. By March 22, brushes of green vegetation are scattered across the landscape.

For more information about the Sistan Wetlands, please see, “From Wetland to Wasteland.”