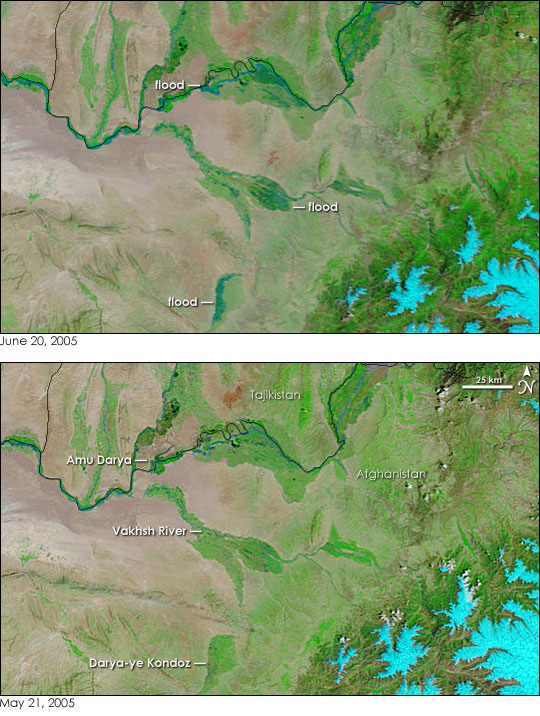 Severe storms starting on June 16, 2005, have flooded much of northern Afghanistan, killing 48 people, the government reports. On June 20, 2005, the Moderate Resolution Imaging Spectroradiometer (MODIS) on NASA’s Terra satellite captured the top image of the region showing several rivers running high. Compared to May 21, 2005, the Amu Darya is fat with flood water. The green web of agricultural land around the Vakhsh River is darkened with water, and the lower reaches of the Darya-ye Kondoz spread across the landscape.

These false-color images highlight the presence of water. Water is dark blue or black, but takes on a lighter shade of blue when it is mixed with sediment. In the lower right corner of both images, the Hindu Kush Mountains are capped with snow, which is bright blue in this color combination. Vegetation is bright green.

More than twenty years of war have left Afghanistan prone to floods. The irrigation and reservoir infrastructures that might otherwise control flood water have been destroyed, leaving the country vulnerable when storms or melting snow tax the river systems.

The large images provided above have a spatial resolution of 500 meters per pixel. The MODIS Rapid Response Team provides daily images of Afghanistan in multiple resolutions and band (color) combinations, including the photo-like true color combination.