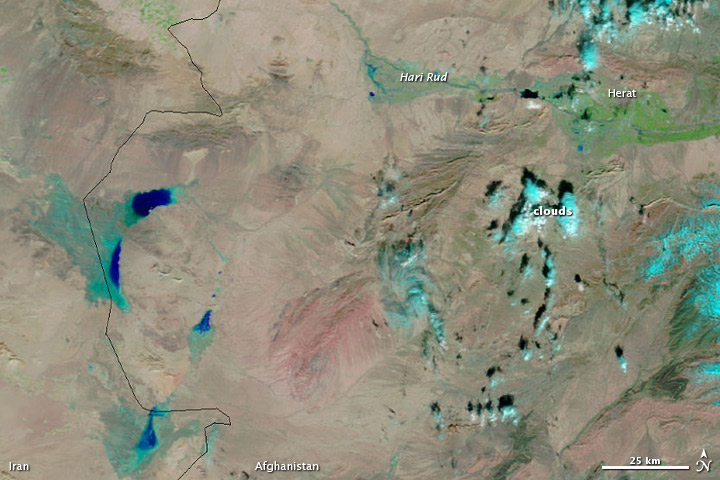 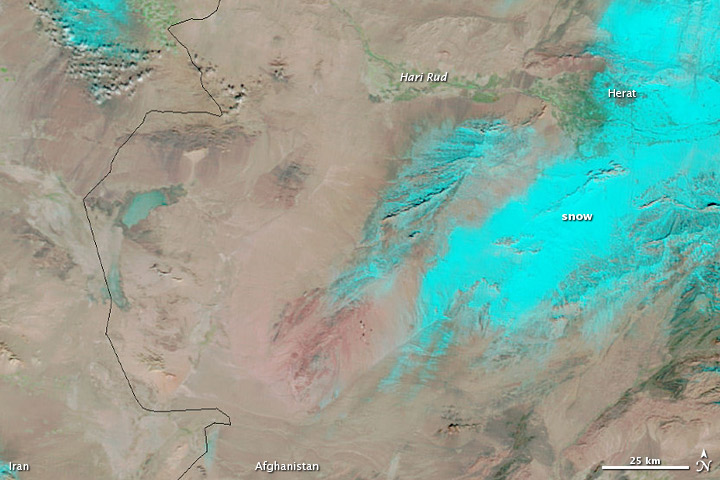 Retreating snow and rising water coincided in western Afghanistan in February 2011. The Flood Observatory attributed the flooding in Herat Province to snowmelt, while TOLOnews reported the destruction of hundreds of homes and thousands of hectares of agricultural land. Six people were killed. Meanwhile, the Afghan Air Force conducted aerial surveys that revealed widespread flood damage.

Both images use a combination of visible and infrared light to increase the contrast between water and land. Water ranges from pale blue-green to navy, and tends to darken in color with increasing depth. Vegetation is green. Bare ground varies in color from pink-beige to brown. Clouds are pale blue-green or off-white, and cast dark shadows onto the land surface below. Snow cover—visible in the January 14 image—is roughly the same color as the clouds, but can be distinguished by its more distinct margins.

Aside from the retreat of snow cover, the most striking difference is the higher water levels in the February 15 image. Impermanent lakes occur along the border between Afghanistan and Iran. In January, these areas appear in earth tones or shades of pale blue-green, indicating that the lakes were dry or holding minimal water. A month later, the lakes are deep blue, surrounded by paler shades of blue-green. Although less conspicuous, water levels are also higher in the Hari Rud River that passes the provincial capital of Herat. The river banks have greened with vegetation.