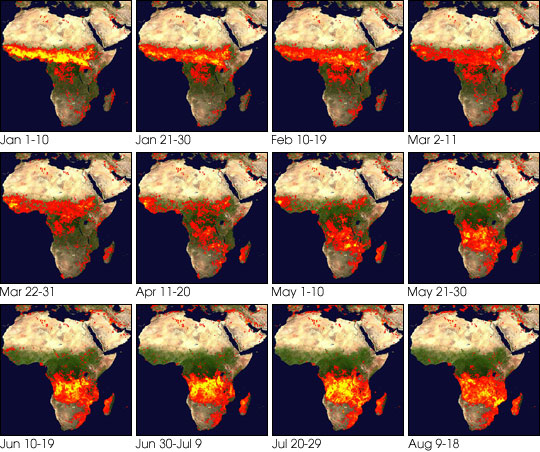 Season after season, year after year, people set fire to African landscapes to create and maintain farmland and grazing areas. People use fire to keep less desirable plants from invading crop or rangeland, to drive grazing animals away from areas more desirable for farming, to remove crop stubble and return nutrients to the soil, and to convert natural ecosystems to agricultural land. The burning area shifts from north to south over the course of the year, in step with the coming and going of Africa’s rainy and dry seasons.

This series of images shows the seasonal fire patterns in Africa throughout 2005. The images are based on fires detected by the Moderate Resolution Imaging Spectroradiometer (MODIS) on NASA’s Terra and Aqua satellites. Each image is a composite of 10 days of fire detections (marked in red and yellow) made by the sensors; the series includes images from every other 10-day period from January 1 through August 19, 2005. Each colored dot indicates a location where MODIS detected at least one fire during the compositing period. When MODIS detected a fire at a location only a few times during the 10-day period, the area is marked in red; when MODIS detected a fire at that location many times, the area is marked in yellow. The fire-detection locations are overlaid on the MODIS Blue Marble.

The series of images begins with the first 10 days of 2005, during which fires were widespread across the area just south of the Sahara Desert. This region includes both the Sahel (a semi-arid zone of transitional vegetation between the Sahara and the rainier savannas to the south) and savannas. From January through early March, the “yellows” fade, indicating fewer fires at those same, northern locations; an exception to this gradual tapering off is on the coast of West Africa, in the region of Guinea and Senegal. Meanwhile, the number of fires is in on the rise in the equatorial forests in the heart of the continent. By May 1-10, the number of northern fires was greatly reduced, and by early July burning in the Sahel and northern savannas had dropped off almost completely, while Southern Africa was ablaze.

Although fires are a part of the natural cycle of the seasonally dry grasslands and savannas of Africa, ecologists, climatologists, and public health officials still have reasons to be concerned about Africa's intense burning. The frequency with which fires return to previously burned areas helps determine what species of plants (and therefore animals) can survive. When the fire-return interval is too quick, the land may become degraded and unusable for farming or grazing. In the semi-arid and fragile Sahel, for example, land degradation through overuse of fire or overgrazing can create pockets of desert. The massive amount of burning that occurs on Africa each year creates carbon dioxide and aerosol particles, both of which play a role in global climate. Finally, the smoke and accompanying gases and particles create a public health hazard; during an area’s burning season, the amounts of ground-level ozone and other air pollutants can become hazardous to human health.

The high-resolution images provided above have a spatial resolution of 1 kilometer per pixel. The MODIS Rapid Response System provides these fires maps for the whole globe at multiple resolutions for selected 10-day periods from 2000-2005.