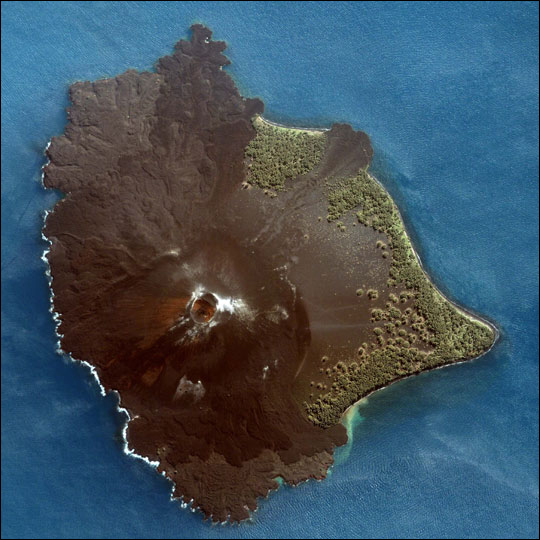 Brown and almost barren, Anak Krakatau rises out of the Sunda Strait, the narrow band of the Indian Ocean that separates the Indonesian islands of Sumatra and Java. This detailed image of the young volcano was taken by the Ikonos satellite on June 11, 2005. The volcano’s circular crater sits southwest of the center of the island and is surrounded by fresh lava flows and ash. The black shores of the island are scalloped where the flows have solidified in the ocean.

Anak Krakatau emerged from the sea less than 80 years ago, and is a natural laboratory to watch the development of an ecosystem. Since the soil is new, it was uncontaminated with seeds. All of the plants seen growing on the island came from seeds that drifted in on the sea or blew across the ocean on the wind. As a result, the plants are clumped on the shallowly sloped eastern shores of the volcano where loose ash and volcanic sand cover the ground. In contrast to the solid rock seen elsewhere on the island, these loose soils allow plants to take root easily.

Most of the plants seen here are grasses, ferns, and herbs that blew in on the wind or coastal trees like coconut, shrubs, and ground vines that floated ashore. Inland, clumps of plants are probably Australian Pine trees and a wild plant related to the sugar cane, both of which disperse seeds on the wind. To learn more, see Wild Indonesia: Birth of an Island, on PBS.

This strip of ocean was not empty before the island pushed its way up. Phoenix-like, Anak Krakatau rose from the crater left when its parent, Krakatau, disappeared in one of the most notorious volcanic eruptions in history. Over a two-day period, August 26-27, 1883, Krakatau erupted with such violence that two-thirds of the island, about 23 square kilometers, sank into the Sunda Strait. Prior to that date, the Krakatau volcano peaked 450 meters above sea level; after the eruption, the top of the volcano sat 250 meters below sea level. Anak Krakatau, which means “child of Kratatau,” replaced the craters destroyed in the 1883 eruption.

The explosions heard in the 1883 eruption remain the loudest noise on human record. The sound was heard across the Indian Ocean, as far away as Rodriguez Island, 4,653 kilometers to the west, and Australia, 3,450 kilometers to the east. The massive eruption also generated a series of tsunamis, which produced waves as much as 30 meters tall. In contrast, the December 26 tsunami that devastated the region in 2004 reached up to 20 meters in height in a few locations. The huge waves created when Krakatau erupted were responsible for most of the 36,000 deaths associated with the eruption.

Like most of the approximately 130 active volcanoes in Indonesia, Krakatau was formed along the Sunda Arc, a 3,000-kilometer-long curve where the Australia Plate sinks beneath the Eurasia Plate. Where these two sections of the Earth’s crust meet, earthquakes and volcanic eruptions are common. Krakatau and the Sunda Strait sit at the hinge of the curve between Sumatra and Java, making this a region particularly prone to geologic activity.