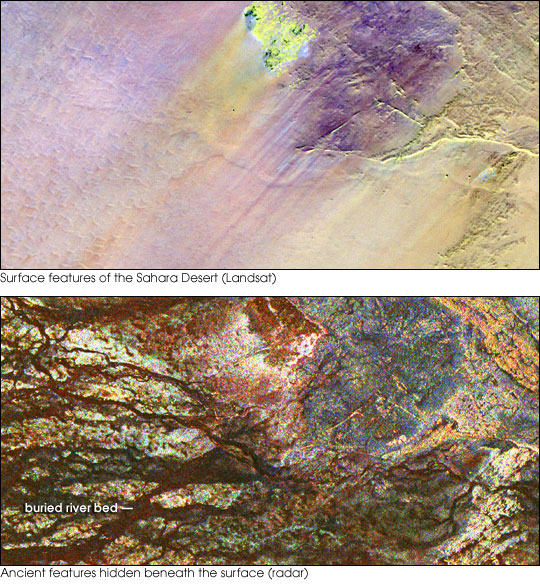 How does a scientist know that the vast, featureless sand fields of the Sahara once ran with water? Water leaves its mark on the land, cutting channels and canyons where rivers flowed and leaving depressions where lakes once pooled. In the Sahara, however, these features are filled with sand. A scientist would have to look under the sand to find the imprint of water from wetter climates. These images of the Safsaf Oasis in south-central Egypt do just that: the top image shows the surface of the desert, while the lower image reveals the water-carved rock under the sand.

The top image, taken by the Landsat Thematic Mapper, shows the desert’s surface. Like a broom on a hard dirt floor, the wind has smoothed the land leaving long diagonal lines that run from the upper right to the lower left of the image. Only the faintest trace of a river channel is visible where water has recently cut through the sand.

The lower image shows what the landscape might look like if stripped bare of sand. The Safsaf Oasis was clearly once a thriving river valley. Sinuous black channels cut by the meandering of an ancient river wind their way through the image. The widest of these runs from the lower left corner towards the center of the image. The image was taken by the Spaceborne Imaging Radar-C/X-band Synthetic Aperture Radar (SIR-C/X-SAR), which uses radar to penetrate the thin sand cover. The sensor flew aboard the space shuttle Endeavour, and took this image on April 16, 1994.

Clues such as ancient river beds help scientists reconstruct what a region’s climate must have been in the past. By learning about past climates, scientists hope to understand and predict future climate change. To read more, see “Paleoclimatology” on the Earth Observatory.