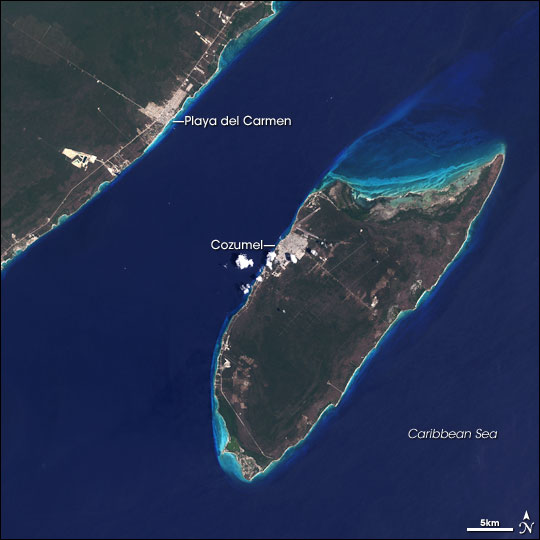 The island of Cozumel off the eastern coast of Mexico’s Yucatan Peninsula is the largest of the islands in the Mesoamerican Reef system. The Mesoamerican Reef is the largest in the Atlantic Ocean, and it stretches about 450 miles southward from the tip of the Yucatan Peninsula to the coast of Honduras. Cozumel’s white-sand beaches slope down into the transparent waters that surround the island’s spectacular coral reefs. The interior of the island is relatively undeveloped, making it a refuge for endemic (found nowhere else) and endangered species of birds and other animals.

This image of the island was captured by the Landsat satellite on April 17, 2001. The major resort area, San Miguel, makes a white spot on the western coastline, and several roads can be seen crisscrossing the interior. Among Cozumel’s many natural treasures is the Punta Sur National Park at the southern tip of the island. The large park encompasses marine and terrestrial protected areas, including lagoons with crystal clear water and mangrove forests.

On July 17, 2005, Hurricane Emily plowed across Cozumel as a Category 4 storm. Although the storm caused significant damage to roofs, roads, and power lines, so far no deaths have been reported on the island.