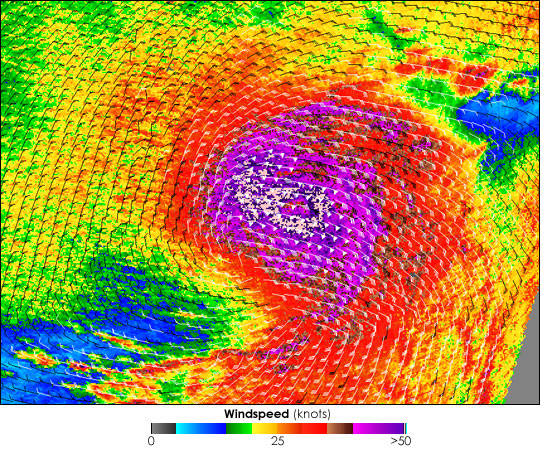 The scatterometer on the satellite records wind speeds by sending pulses of microwave energy through the atmosphere to the ocean surface, and measuring the energy that bounces back from the wind-roughened surface. The energy of the microwave pulses changes depending on wind speed and direction, giving scientists a way to monitor wind around the world. Generating accurate wind speeds inside a typhoon such as Nesat can be challenging because the unusually heavy rain found in a cyclone distorts the microwave pulses in a number of ways, making a conversion to accurate wind speed difficult. As a result, the wind speeds shown here are lower than wind speeds recorded by the Joint Typhoon Warning Center. Instead, the scatterometer provides a nice picture of the relative wind speeds within the storm and shows wind direction.

Typhoon Nesat formed in the North Pacific Ocean on May 30, 2005, the fourth tropical cyclone to form in the region in 2005.