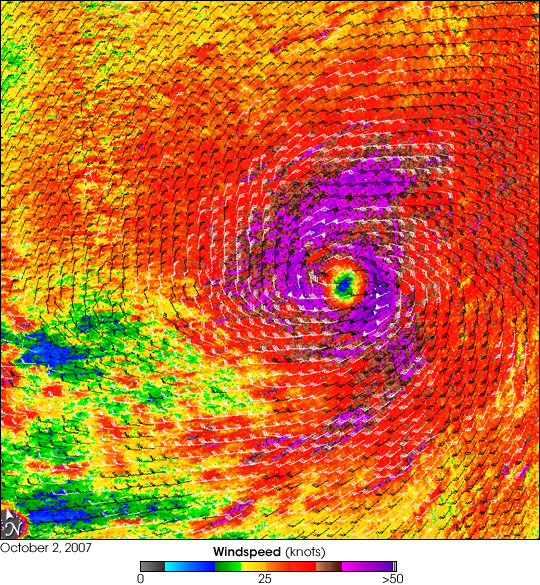 This colorful image reveals the wind structure within the quickly developing Typhoon Krosa. NASA’s QuikSCAT satellite captured the data used to make this image. Wind speeds are depicted in a rainbow of colors, with the highest speeds in purple and the slowest speeds in blue. The barbs show wind direction, and white barbs depict areas of heavy rain.

Though Krosa was a weak storm when QuikSCAT observed it at 9:48 UTC on October 2, 2007, its strengthening winds still have the classic bull’s eye shape observed in a strong storm. Sustained winds in the center of the storm ranged between 110 kilometers per hour (70 miles per hour or 60 knots) and 120 km/hr (75 mph or 65 knots), said the Joint Typhoon Warning Center. These wind speeds put the storm on the border between a tropical storm and a Category 1 typhoon. In this image, the strongest winds are depicted in purple and surround concentric rings of calm air where an eye has clearly formed. The strong wind fields aren’t perfectly symmetric, and that is a sign that the storm was still forming.

Krosa initially formed over the western Pacific Ocean on October 1. The Joint Typhoon Warning Center predicted that the storm would grow into a powerful typhoon as it moved towards the China coast.

Typhoon Krosa initially formed over the western Pacific Ocean on October 1. The Joint Typhoon Warning Center predicted that the storm would grow into a powerful typhoon as it moved towards the China coast.