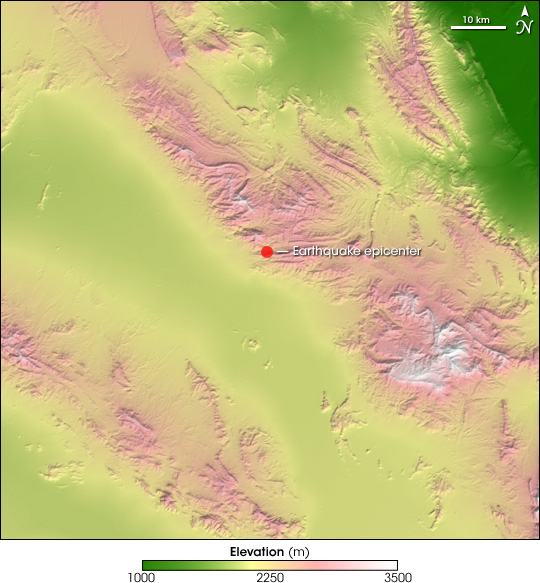 For eleven seconds on Tuesday morning February 22, 2005, the ground shook in southern Iran as a 6.4-magnitude earthquake rattled the mountainous area near the town of Zarand. According to news reports, more than 500 people have been killed, and tens of thousands of people have been affected in dozens of scattered villages, many of which were almost completely destroyed.

This image shows the topography around the town of Zarand, in the Kerman region to the west of the Lut Desert. Two lines of mountains run southeastward through the scene, separated by a broad valley, through which the Shur Ab River flows. The approximate location of the earthquake’s epicenter is marked with a red dot near image center. The highest elevations in the scene (white) are found on the summit of Kuhpayeh Mountain, near the right center edge.

Iran is very seismically active. The land there is being compressed by the coming together of the Arabian tectonic plate to the west and the Eurasian plate to the east-northeast. Much of the compressional force of the two plates pushing together is released by mountain-building and rock-folding processes in the Zagros Mountains, which overlook the Persian Gulf, to the west of this scene. However, in the central-east portion of Iran, the pressure is released at numerous “strike-slip” faults, places where the plates grind past each other in a sideways motion, rather than over or under each other. The town of Zarand is located along one of several northwest-southeast slip faults in the region north of the town of Kerman.

For SRTM, engineers refined the technology of previous missions by adding a 60-meter (approximately 200-foot) mast, installing additional C-band and X-band antennas, and improving tracking and navigation devices. These refinements allowed SRTM to collect the 3-dimensional observations of Earth’s surface.

The mission is a cooperative project between NASA, the National Geospatial-Intelligence Agency (NGA) of the U.S. Department of Defense and the German and Italian space agencies. It is managed by NASA’s Jet Propulsion Laboratory, Pasadena, Calif., for NASA’s Earth Science Enterprise, Washington, D.C.