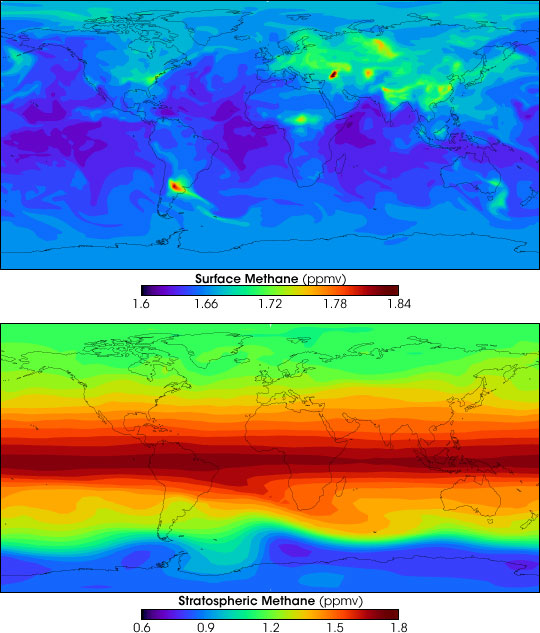 Methane is an important trace gas in Earth’s atmosphere. Even though it only makes up 0.00017% (1.7 parts per million by volume) of the the atmosphere, methane traps a significant amount of heat, helping the planet remain warm and habitable. The amount of methane in the atmosphere is the result of a balance between production on the surface and destruction in the atmosphere. Methane forms when organic matter decomposes in oxygen-poor environments, such as marshes, rice paddies, or the digestive systems of cattle. It also comes from combustion (burning) of carbon-based fuels.

These maps show the distribution of methane at the surface (top) and in the stratosphere (lower), calculated by a NASA computer model. Concentrations are shown in parts per million by volume. Methane is created near the surface, and it is carried into the stratosphere by rising air in the tropics. Uncontrolled build-up of methane in Earth's atmosphere is naturally checked—although human influence can upset this natural regulation—by methane’s reaction with a molecule known as the hydroxyl radical, a hydrogen-oxygen molecule formed when single oxygen atoms react with water vapor.

Early in the Earth’s history—about 3.5 billion years ago—there was 1,000 times as much methane in the atmosphere as there is now. The earliest methane was released into the atmosphere by volcanic activity. During this time, Earth's earliest life appeared. These first, ancient bacteria added to the methane concentration by converting hydrogen and carbon dioxide into methane and water. Oxygen didn’t become a major part of the atmosphere until photosynthetic organisms evolved later in Earth's history. With no oxygen, methane stayed in the atmosphere longer and at higher concentrations than it does today.

Scientists think that one body in the solar system—Saturn’s moon Titan—now has an atmospheric composition similar to the early Earth’s, including several percent methane gas. The NASA/European Space Agency Huygens probe, which landed on Titan’s surface on January 14th, 2005, studied the moon’s atmosphere as it descended. Methane, which exists as both a liquid and a gas in Titan’s frigid (-179°C) skies, appears to act on Titan somewhat like water does on Earth. Huygens made observations that seem to indicate that recent methane rainstorms had occurred on Titan, and features on the surface suggest rivers of liquid methane. Continued study of Titan by Cassini and possible future missions may help us understand our own planet’s early history.