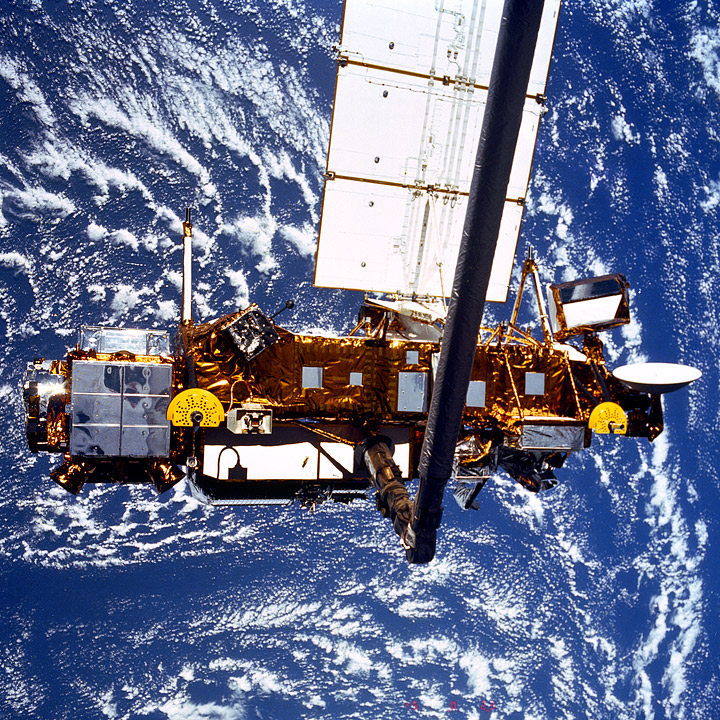 Twenty years ago this month, astronauts on the space shuttle Discovery used the spacecraft's robotic arm to launch the Upper Atmosphere Research Satellite (UARS) into orbit around the Earth. Armed with ten instruments, UARS was designed to observe key chemical constituents of the stratosphere and upper atmosphere, and to decipher how sunlight warms the air and provokes changes in that chemistry.

UARS is perhaps best remembered for studies of the ozone layer and Antarctic ozone hole, particularly the role of chlorine, halocarbons, and nitrous oxides in ozone depletion. The satellite also was perfectly positioned to observe the transport of volcanic aerosols and the cooling of the atmosphere in the wake of the eruption of Mount Pinatubo. Many long-term climate records—such as measurements of solar radiation and greenhouse gases—were started or continued by the UARS mission.

Astronauts on the STS-48 mission captured this photograph of UARS as it was lifted out of the cargo bay by the Remote Manipulator System on September 15, 1991. The bus-sized satellite was placed into an orbit 575 kilometers (360 miles) in altitude and flying between 57 degrees north and south latitude. The satellite was decommissioned in 2005 after several new satellites took up more advanced studies of the same atmospheric characteristics.

After 7,317 days in space—17 years beyond its designed life—the satellite was expected to descend through the atmosphere on September 23, 2011, burning up most of its six tons of hardware and depositing an estimated 26 pieces (500 kilograms) on Earth's surface (likely in the ocean). At 10:30 a.m. on September 23, the orbit of UARS was 100 miles by 105 miles (160 kilometers by 170 kilometers) above Earth's surface, and the satellite was slowing as it ran into friction from progressively thicker layers of the atmosphere. Re-entry was expected late on the 23rd or early on the 24th.

"There is a low probability any debris that survives re-entry will land in the United States," NASA Headquarters announced, "but the possibility cannot be discounted because of this changing rate of descent." A small piece of orbital debris re-enters Earth's atmosphere just about every day, and one moderate-sized object falls every week. The vast majority of it falls in the ocean, which covers 70 percent of Earth's surface. There has never been a report of a person being injured by falling debris.