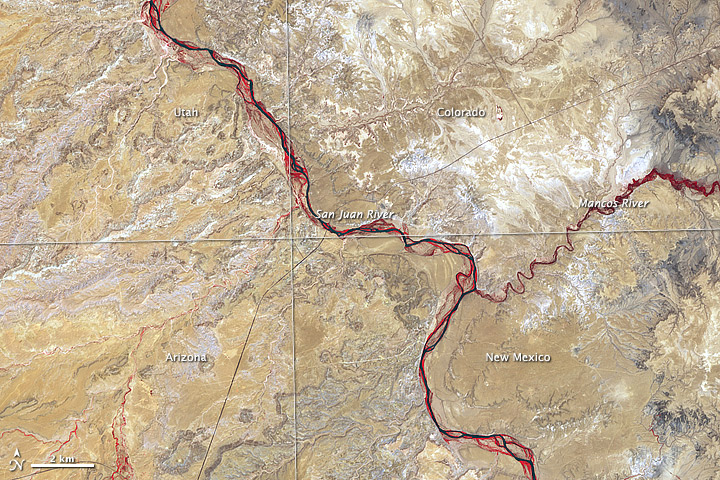 In just one place in the United States do four states meet. The borders of Utah, Colorado, New Mexico, and Arizona intersect at Four Corners, west of the confluence of the Mancos and San Juan Rivers. The Advanced Spaceborne Thermal Emission and Reflection Radiometer (ASTER) on NASA’s Terra satellite captured this image of the region on June 11, 2011.

ASTER produces images using infrared, red, and green wavelengths of light. Vegetation is red, and sparsely vegetated or bare areas range from off-white to gray to tan. Water appears navy blue to nearly black. Vegetation (bright red) lines the braided river channels, but the rarity of red in this image attests to the general paucity of vegetation in the region, where shrubs dot plateaus and dry valleys.

Maps from the U.S. Geological Survey (USGS) indicate that most of the rock layers around Four Corners were deposited during the Age of Reptiles, about 248 to 65 million years ago. The rocks formed from fine sediments eroded off older rocks and subsequently deposited by wind and water.

Although water may be in short supply in this region now, it was once abundant. About 70 million years ago, the Four Corners region sat along the western shore of a shallow sea that split North America in two. Marine reptiles such as mosasaurs and mollusks such as ammonites swam in the temperate sea while pterosaurs flew overhead fishing for snacks.

The shallow sea alternately advanced and retreated during the time of the dinosaurs. Around the end of the Mesozoic, today’s Rocky Mountains began to rise. Land that was once seafloor is now elevated far above sea level and consists of high desert. 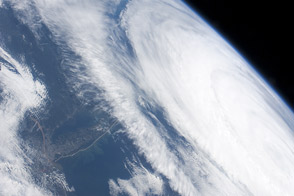