Hurricane Katia off the Northeastern US Coastline 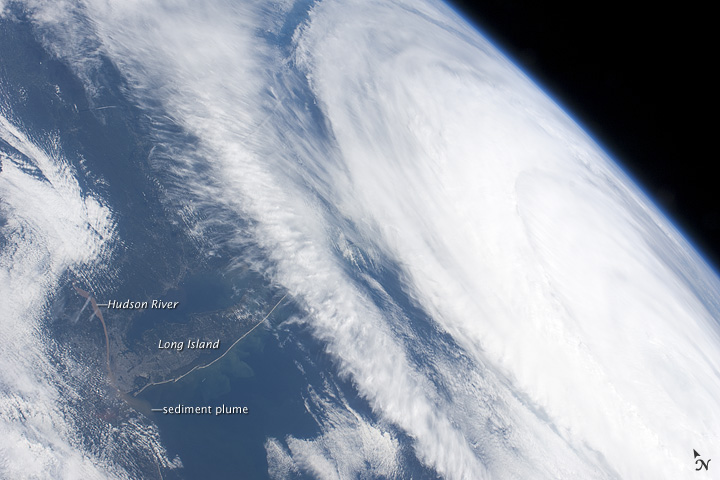 Hurricane Katia had diminished to Category 1 strength on the Saffir-Simpson scale by the time this astronaut photograph was taken, but it still presented an impressive cloud circulation as its center passed the northeastern coast of the United States on September 9, 2011. The storm reached Category 4 strength earlier on September 5, making it the second major hurricane of the 2011 Atlantic hurricane season. Katia remained over open waters of the Atlantic Ocean for all of its lifetime, unlike two preceding storms of the season— Hurricane Irene and Tropical Storm Lee—that both made landfall on the continental U.S.

The approximate center of Hurricane Katia is visible at image right, with its outer cloud bands extending across the center of the view. A small part of New York—including Long Island and the Hudson River—is visible through a gap in the cloud cover. The Hudson River has a chocolate brown coloration due to heavy loading with sediment, a consequence of flooding and erosion of the upstream watershed by precipitation from Hurricane Irene and Tropical Storm Lee. A plume of sediment is visible entering the Atlantic Ocean on the southern coastline of Long Island, directly to the south of New York City (partially obscured by clouds).

Crew members on the International Space Station can take images like this one by looking outwards at an angle through ISS windows—much like taking photographs of the ground from a commercial airliner window, albeit from an average altitude of 400 kilometers (250 miles).

Astronaut photograph ISS028-E-45516 was acquired on September 9, 2011, with a Nikon D2Xs digital camera using a 28 mm lens, and is provided by the ISS Crew Earth Observations experiment and Image Science & Analysis Laboratory, Johnson Space Center. The image was taken by the Expedition 28 crew. The image has been cropped and enhanced to improve contrast. Lens artifacts have been removed. The International Space Station Program supports the laboratory as part of the ISS National Lab to help astronauts take pictures of Earth that will be of the greatest value to scientists and the public, and to make those images freely available on the Internet. Additional images taken by astronauts and cosmonauts can be viewed at the NASA/JSC Gateway to Astronaut Photography of Earth. Caption by William L. Stefanov, Jacobs/ESCG at NASA-JSC.

Viewed from the space station, Hurricane Katia presented an impressive cloud circulation as its center passed the northeastern coast of the United States on September 9, 2011.