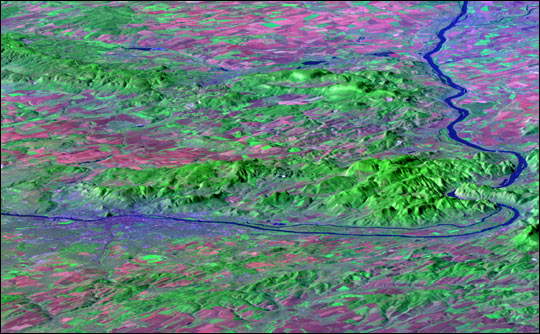 After draining the northern flank of the Alps Mountains in Germany and Austria, the Danube River flows east as it enters this west-looking scene (upper right) and forms the border between Slovakia and Hungary. The river then leaves the border as it enters Hungary and transects the Transdanubian Mountains, which trend southwest to northeast. Upon exiting the mountains, the river turns southward, flowing past Budapest (purplish blue area) and along the western margin of the Great Hungarian Plain.

South and west of the Danube, the Transdanubian Mountains have at most only about 400 meters (about 1300 feet) of relief but they exhibit varied landforms, which include volcanic, tectonic, fluvial (river), and eolian (wind) features. A thick deposit of loess (dust deposits likely blown from ancient glacial outwash) covers much of this area, and winds from the northwest, funneled between the Alps and the Carpathian Mountains, are apparently responsible for a radial pattern of erosional streaks across the entire region.

This image was generated from a Landsat satellite image draped over an elevation model produced by the Shuttle Radar Topography Mission (SRTM). The view uses a 3-times vertical exaggeration to enhance topographic expression. The false colors of the scene result from displaying Landsat bands 1, 4, and 7 in blue, green, and red, respectively. Band 1 is visible blue light, but bands 4 and 7 are reflected infrared light. This band combination maximizes color contrasts between the major land cover types, namely vegetation (green), bare ground (red), and water (blue). Shading of the elevation model was used to further highlight the topographic features.

Elevation data used in this image was acquired by the Shuttle Radar Topography Mission (SRTM) aboard the Space Shuttle Endeavour, launched on February 11, 2000. SRTM used the same radar instrument that comprised the Spaceborne Imaging Radar-C/X-Band Synthetic Aperture Radar (SIR-C/X-SAR) that flew twice on the Space Shuttle Endeavour in 1994. SRTM was designed to collect three-dimensional measurements of the Earth’s surface. To collect the 3-D data, engineers added a 60-meter-long (200-foot) mast, installed additional C-band and X-band antennas, and improved tracking and navigation devices. The mission is a cooperative project between the National Aeronautics and Space Administration (NASA), the National Geospatial-Intelligence Agency (NGA) of the U.S. Department of Defense (DoD), and the German and Italian space agencies. It is managed by NASA’s Jet Propulsion Laboratory, Pasadena, CA, for NASA’s Earth Science Enterprise, Washington, DC.