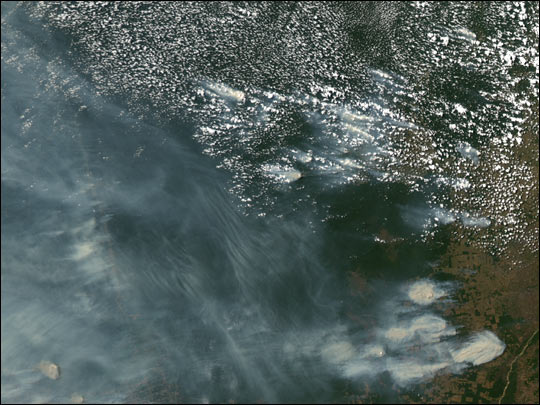 Mushrooms of smoke billow up from burning vegetation in the Amazon and spread across a wide region of Mato Grosso state in Brazil in this Moderate Resolution Imaging Spectroradiometer (MODIS) image captured by the Aqua satellite on August 11, 2002. To the north, puffs of cumulus clouds hang above the forest. According to a new study by NASA scientists, the absence of clouds where smoke is present isn’t a coincidence; analysis of data captured by Aqua MODIS in August through October 2002 revealed that smoke from biomass burning inhibits cloud formation in the tropics.

Cumulus clouds are formed by convection—the rising of warm air near the Earth’s surface into the colder layers of air at higher altitudes. But dark-colored smoke particles hanging in the air absorb incoming solar radiation in the morning, which warms the air up high and keeps the air near the surface cool. Cool air tends to not rise, so convection and the clouds that form as a result of it are suppressed. In the afternoon, when the Sun is more intense, the absence of clouds causes the surface to warm even further.

In this study, the warming due to smoky aerosols appeared to be stronger than the well-established cooling effect of light-colored aerosols, which reflect solar radiation back into space. The smoke adds the equivalent of an 8-watt light bulb per square meter of land surface to the heating of the Earth’s climate system. For more on this discovery and how the scientists reached their conclusion, read the press release, NASA Satellite Data Show Heavy Smoke ‘Chokes’ Clouds.

The part of Brazil pictured in this scene includes the Xingu Indigenous People’s Reserve, which is the swath of dark green, intact rainforest surrounded on either side by cleared land, and the Bananal Wetlands, whose vegetation appears purplish-brown around the banks of the silvery Araguaia River at image right.

Image by Jesse Allen & Robert Simmon, based on data provided by the MODIS Science Team