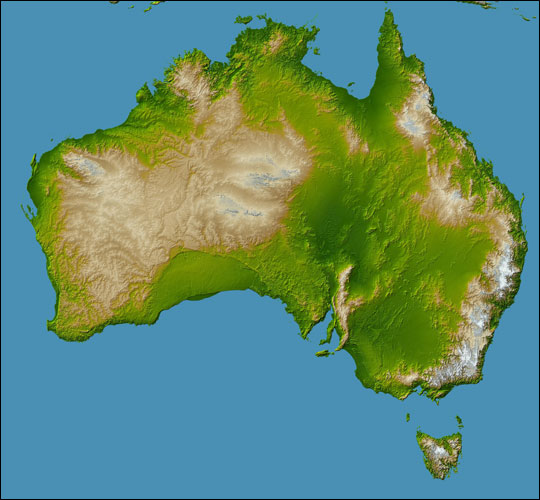 Australia is the world’s smallest, flattest, and (after Antarctica) driest continent, but at 7.7 million square kilometers (3.0 million square miles), it is also the sixth largest country. Its low average elevation (300 meters, or less than 1000 feet) is caused by its position near the center of a tectonic plate, where there are no volcanic or other geologic forces of the type that raise the topography of other continents. In fact, Australia is the only continent without any current volcanic activity at all—the last eruption took place 1,400 years ago at Mt. Gambier.

Prominent features of Australia include the Lake Eyre basin, the darker green region visible in the center-right. At 16 meters (52 feet) below sea level, this depression is one of the largest inland drainage systems in the world, covering more than 1.3 million square kilometers (500,000 square miles). The mountain range near the east coast is called the Great Dividing Range, forming a watershed between east- and west-flowing rivers. Erosion has created deep valleys, gorges and waterfalls in this range where rivers tumble over escarpments on their way to the sea.

The crescent-shaped, uniformly green region in the south, just left of center, is the Nullarbor Plain, a low-lying limestone plateau which is so flat that the Trans-Australian Railway runs through it in a straight line for more than 483 kilometers (300 miles).

The Australian continent is one of the oldest land masses, with some of its erosion-exposed bedrock dated at more than 3 billion years old. More than one-fifth of the land area is desert, with more than two-thirds being classified as arid or semi-arid and unsuitable for settlement. The coldest regions are in the highlands and tablelands of Tasmania (large island at bottom right) and the Australian Alps at the southeastern corner of the continent, which is the location of Australia’s highest point, Mt. Kosciusko (2,228 meters, or 7,310 feet.)

Elevation data used in this image were acquired by the Shuttle Radar Topography Mission aboard the Space Shuttle Endeavour, launched on Feb. 11, 2000. SRTM used the same radar instrument that comprised the Spaceborne Imaging Radar-C/X-Band Synthetic Aperture Radar (SIR-C/X-SAR) that flew twice on the Space Shuttle Endeavour in 1994. SRTM was designed to collect 3-D measurements of the Earth’s surface. To collect the 3-D data, engineers added a 60-meter (approximately 200-foot) mast, installed additional C-band and X-band antennas, and improved tracking and navigation devices. The mission is a cooperative project between NASA, the National Geospatial-Intelligence Agency (NGA) of the U.S. Department of Defense, and the German and Italian space agencies. It is managed by NASA’s Jet Propulsion Laboratory, Pasadena, Calif., for NASA’s Earth Science Enterprise, Washington, D.C.