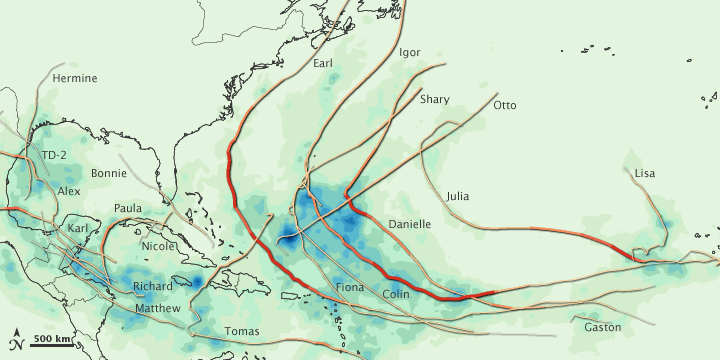 November 30 marked the end of the 2010 Atlantic hurricane season. Throughout the season, nineteen named storms formed over the basin, making it the third most active season on record, tied with 1887 and 1995. Twelve of those storms became hurricanes, and five of them became major hurricanes (Category 3 or higher). It was the most active season since the record-breaking 2005 season. (For a comparison between the two seasons, see the TRMM web site.)

This image shows the paths taken by the storms and the rainfall associated with each storm throughout the season. The rainfall measurements are from the Multisatellite Precipitation Analysis, which is based on data from the Tropical Rainfall Measuring Mission (TRMM) satellite. Although most of the major storms missed the continental United States, curving back out to sea instead, hurricanes and tropical storms did major damage to Haiti, eastern Mexico, and Central America.

Multiple hurricanes formed around Cape Verde, off the west coast of Africa. Small areas of significant rainfall appear in that region. Expansive areas of intense rainfall occur over the open waters of the Atlantic Ocean, and these high rainfall amounts correlate to areas where storms curved back to the east, stopping short of reaching the continental United States.

In the wake of the Deepwater Horizon oil spill, many Gulf Coast residents worried about the potential impact of hurricane activity. Only one storm, however, impaired cleanup operations. Hurricane Alex caused a five-day delay.

Though relatively infrequent, tropical cyclones make a significant contribution to the seasonal accumulation of rainfall in the southeastern United States. In a recent study, Dr. Marshall Shepherd and collaborators at the University of Georgia found that tropical storm systems contribute an average of 13 percent of the total rainfall during the hurricane season.