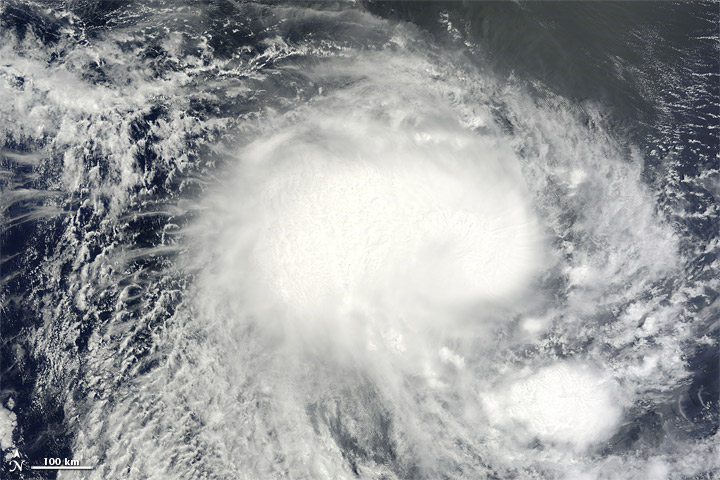 On November 30, 2010, the 2010 Atlantic hurricane season came to a close, but tropical cyclones are a global phenomenon, and it’s always cyclone season somewhere. On November 29, 2010, Tropical Cyclone Abele formed over the southern Indian Ocean. On December 1, 2010, the U.S. Navy’s Joint Typhoon Warning Center reported that Abele had maximum sustained winds of 40 knots (75 kilometers per hour) with gusts up to 50 knots (95 kilometers per hour). The storm was located some 675 nautical miles (1,250 kilometers) west-southwest of Cocos Island, Australia.

The Moderate Resolution Imaging Spectroradiometer (MODIS) on NASA’s Terra satellite captured this natural-color image of Abele on December 1, 2010. Abele spans hundreds of kilometers over the open ocean. The storm lacks a distinct eye, but sports the apostrophe shape characteristic of tropical cyclones.

Over the past two centuries, tropical cyclones have killed nearly two million people, and forecasters worldwide continually strive to improve storm forecasts. In less developed parts of the globe, a dearth of data has historically hampered predictions. A new tool in forecasters’s arsenal, however, is the Pleiades supercomputer at NASA’s Ames Research Center. Relying on Pleiades’ computing muscle, researchers have been able to model storm formation by feeding the computer data about wind speed, temperature, and mositure. In the case of Cyclone Nargis, which struck in 2008, researchers were able to replicate the tropical cyclone’s formation five days in advance. The project offered hope for improving future predictions worldwide.