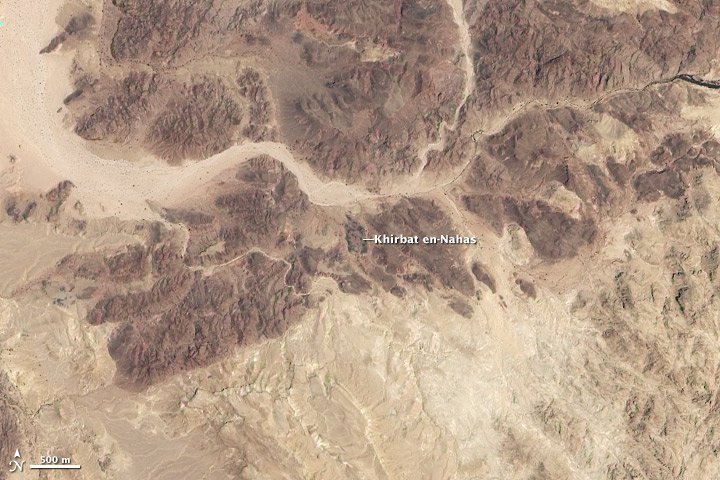 Black piles of slag define Khirbat en-Nahas, a copper mining and smelting site, in this image, taken by the Advanced Land Imager (ALI) on NASA’s Earth Observing-1 (EO-1) satellite on August 11, 2010. It is not so unusual that a copper mine should show up in a satellite image (the Earth Observatory has posted several examples), but Khirbat en-Nahas is remarkable because it was built some 3,000 years ago. The faint square on the northern edge of the site is an Iron Age fortress.

Khirbat en-Nahas is tucked into a desert valley between the Dead Sea and the Gulf of Aqaba, now in Jordan. In order for copper production to reach such a vast scale in such a desolate place, Khirbat en-Nahas had to have been built by an organized state, says archeologist Tom Levy of the University of California-San Diego, who has been studying the site for more than 10 years.

As excerpted from the Earth Observatory’s article, Earth Observing-1: Ten Years of Innovation:

“Copper mining and smelting is a hallmark of early state-level society in the eastern Mediterranean,” says Stephen Savage, a researcher from Arizona State University. He is helping Levy uncover evidence for sophisticated economic and political activity in the valley about 3,000 years ago.

Savage has never been to Khirbat en-Nahas, but he is revealing things about the site no archeologist has been able to see before. Instead of spending sweltering days in the desert, Savage logs in to a website, clicks on a map to select a location, and clicks “submit”. With that, he has requested that NASA’s Earth Observing-1 (EO-1) satellite point its instruments at his site the next time it flies over.

This type of user-driven experience was not part of the initial plans for EO-1, but it is an example of the spirit of exploration and experimentation that has characterized the mission.

Scheduled to fly for a year, designed to last a year and a half, EO-1 celebrated its tenth anniversary on November 21, 2010.

Black piles of slag define the ancient copper mining and smelting site, Khirbat en-Nahas, in this image from August 11, 2010.