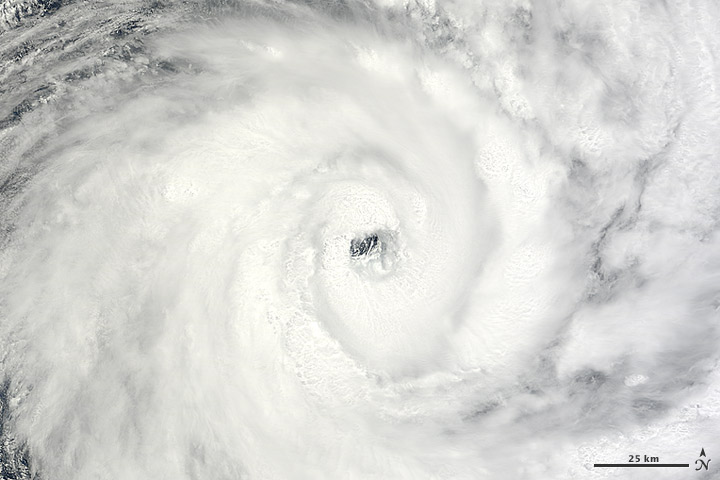 Anais formed as a tropical storm over the southern Indian Ocean on October 12, 2012, and strengthened into a tropical cyclone the next day. By October 15, 2012, the U.S. Navy’s Joint Typhoon Warning Center (JTWC) reported that Anais had maximum sustained winds of 100 knots (185 kilometers per hour) and gusts up to 125 knots (230 kilometers per hour). The storm was located about 540 nautical miles (1,000 kilometers) southwest of Diego Garcia.

The Moderate Resolution Imaging Spectroradiometer (MODIS) on NASA’s Terra satellite captured this natural-color image of Anais on October 14. The storm sported an open eye that allowed the satellite sensor a clear view to the ocean surface.

The JTWC forecast that Anais would gradually weaken over the next few days as it headed in the direction of Madagascar. As of October 15, Anais was forecast to dissipate before making landfall.

Giovanna spans hundreds of kilometers in the southern Indian Ocean east of Madagascar on February 10, 2012.