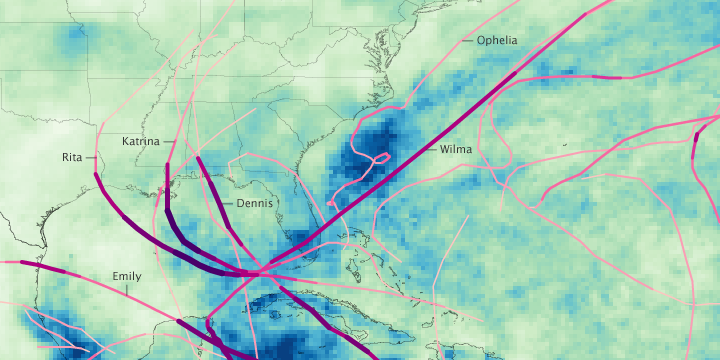 Extreme to exceptional drought reigned over the southeastern United States as 2007 drew to a close. The year also saw a paucity of tropical cyclones–tropical depressions, tropical storms, and hurricanes–that normally drench parts of the Eastern Seaboard and the Gulf Coast. Tropical cyclones don’t just strike a single location. They can come ashore over a wide swath of shoreline and move inland, laying down heavy rain over hundreds of kilometers. Though relatively infrequent, tropical cyclones make a significant contribution to the seasonal accumulation of rainfall in the southeastern United States. In a recent study, Dr. Marshall Shepherd and collaborators at the University of Georgia found that tropical storm systems contribute an average of 13 percent of the total rainfall during the hurricane season. It is possible that the relative lack of storms making landfall over the southeastern United States during the 2006 and 2007 hurricane seasons contributed to the drought.

Fortunately, it won’t take the destruction brought by a major hurricane to break the drought. Shepherd and colleagues found that while major hurricanes (Category 3, 4, or 5) dump more rain in a single day than other storms, weaker hurricanes, tropical storms, and depressions contribute more to the cumulative total throughout the hurricane season. Shepherd analyzed rainfall data collected by the Tropical Rainfall Measuring Mission (TRMM) satellite between 1998 and 2006. They found that the wettest months, on average, were September and October, also the most active hurricane months. Most unusually rainy days during that period were caused by some kind of tropical system. Because weaker systems occur more frequently, they contribute more to the overall rainfall total for the season than powerful storms.

These results are illustrated by the 2005 hurricane season, a record-setting year for the Atlantic. Between June and December, 31 tropical cyclones formed, more than any other year on record at the National Hurricane Center. During the hurricane season (June–November), seven major hurricanes developed, including the most intense Atlantic storm on record (Hurricane Wilma) and the most costly (Hurricane Katrina), said the National Hurricane Center.

This image shows rainfall totals, as observed by TRMM, for the season. The highest totals are dark blue, while the lowest totals are white. In general, the highest rainfall totals are in the wake of smaller storms. The largest area of heavy rain was over the Atlantic Ocean in the path of Hurricane Ophelia, a weak, Category-1 hurricane. By contrast, the larger storms, like Hurricanes Rita, Katrina, and Dennis, dropped less rain. Though the general trend is for small tropical cyclones to make significant contributions to the rainfall totals, additional factors, including more frequent, small rainstorms, may also have influenced the pattern shown in 2005.

Though relatively infrequent, tropical cyclones make a significant contribution to the seasonal accumulation of rainfall in the southeastern United States. In a recent study, Dr. Marshall Shepherd and collaborators at the University of Georgia found that tropical storm systems contribute an average of 13 percent of the total rainfall during the hurricane season.

In early September 2019, a loose chain of tropical cyclones lined up across the Western Hemisphere.