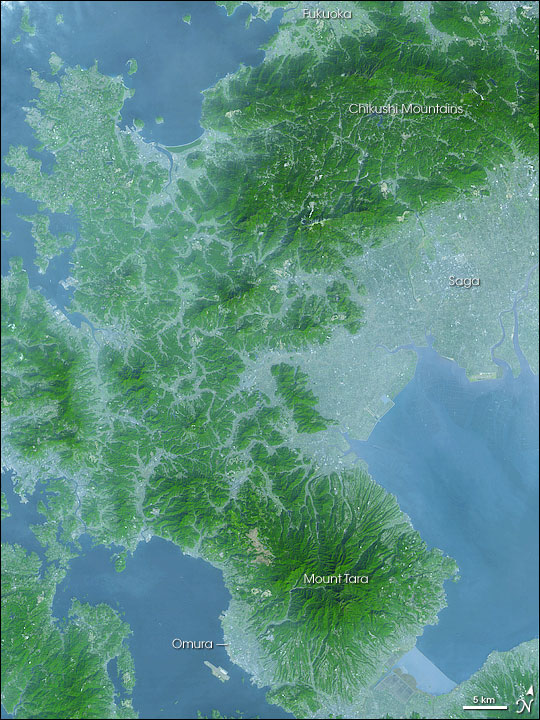 Part of the Pacific “Ring of Fire, ” Japan sits at the intersection of at least four tectonic plates: the Pacific, the Philippine Sea, the North American, and the Eurasian. As a result, Japan sports a complex landscape of mountains, plains, and dormant and active volcanoes. One example of that complicated topography appears in southwestern Japan, on the island of Kyushu.

The Advanced Spaceborne Thermal Emission and Reflection Radiometer (ASTER) on NASA’s Terra satellite captured this image of part of Kyushu on January 9, 2008. In this simulated true-color image, water is blue, vegetation is green, and urban areas are white to blue-gray. Urban areas mix with mountainous, vegetated terrain throughout the image. The city of Omura rests on the slope of Mount Tara, and the large urban areas of Saga and Fukuoka sit on either side of the Chikushi Mountains.

The diverse terrain results largely from the island’s location over a subduction zone, where one tectonic plate slides below another. The pressure melts rocks, and the magma emerges at the surface in volcanoes. Kyushu has active volcanoes, such as Mount Unzen, and extinct volcanoes, such Mount Tara, shown near the bottom of this image. Also known as Tara-dake, this volcano was active between 4.6 million to 800,000 years ago. A steep, conical stratovolcano made of alternating layers of ash, lava, and rock, Mount Tara still bears the marks of its more active past, including a faint summit caldera, from which lava once flowed toward the sea.

Mountains occupy some three-quarters of Japan, interspersed with plains. Thanks to the continuing movement of the Earth’s crust below the islands, these mountains and plains are divided into relatively small chunks with a complicated arrangement. Weather patterns add another dimension to the landscape as rain draining off steep slopes erodes some areas and deposits sediment into others. The result is a rugged, ever-changing landscape.