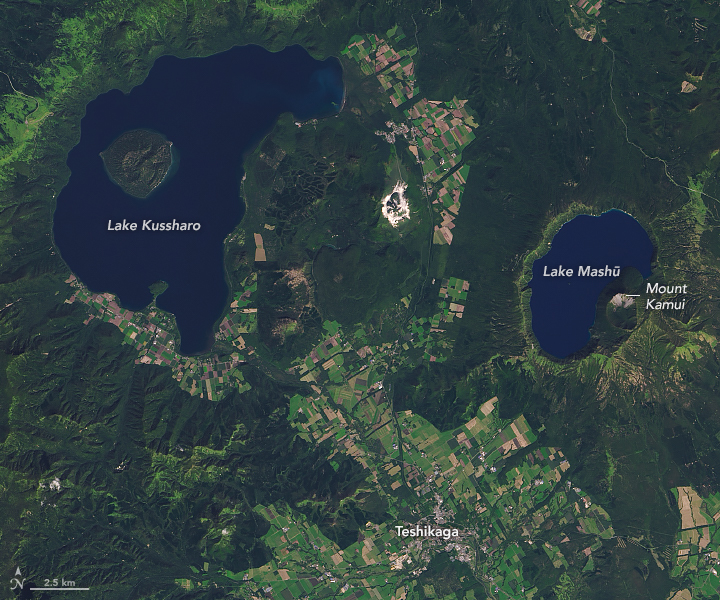 Volcanoes usually have a central vent at their summit that connects to an underground magma chamber, through which most volcanic materials pass during eruptions. But that central vent is not always the only route out. Sometimes central vents get plugged and pressure builds up enough that magma and volcanic gases find smaller, alternate routes to the surface. These secondary vents cause smaller volcanoes—called parasitic cones (also satellite or adventive cones)—to build up along the flanks or base of a larger volcano. The features sometimes grow into large volcanic centers themselves.

The Operational Land Imager (OLI) on Landsat 8 acquired this natural-color image of two parasitic cones in Hokkaido on September 27, 2019. The image also highlights calderas, the bowl-shaped volcanic basins that form when volcanoes erupt explosively or when the top of a volcano slumps into an empty or partly empty magma chamber. Since they are often enclosed by steep cliffs and lack outlets for water to run off, calderas often fill up with lakes.

The smallest of the volcanic features in the image is also the youngest. A series of eruptions that began about 4,000 years ago built up the lava dome that became Mount Kamui, with the most recent blast happening about 1,000 years ago. The collapse that created the Mashū caldera happened about 7,000 years ago, following a major eruption. Kussharo, the oldest feature, formed as a result of major eruptions between 340,000 and 30,000 years ago.

The features are located within Akan-Mashū National Park, which is among Japan’s oldest national parks. Without inlets or outlets, Lake Mashū is known as one of the clearest lakes in Japan. With acidic waters, Lake Kussharo has few fish, but its volcanic origins provide fuel for natural hot springs. Kussharo has the largest caldera lake in Japan.