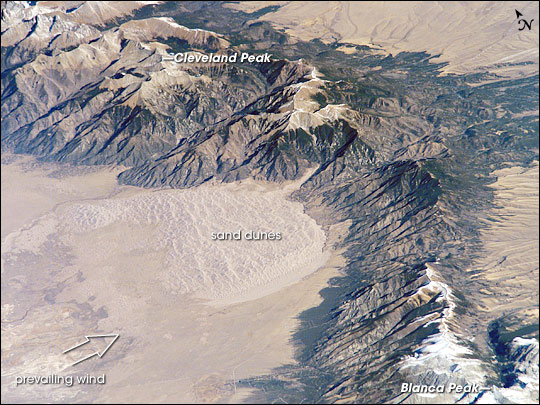 The Sangre de Cristo Mountains of south-central Colorado stretch dramatically from top left to lower right of this astronaut photograph. The mountains are outlined by dark green forests at lower elevations and white, snow-capped peaks at the highest elevations. Dun-colored dunes, covering an area of 80 square kilometers, are banked up on the west side of the mountains. These dunes make up the Great Sand Dunes National Park and Preserve. Originally established in 1932 as a National Monument, it was reauthorized as a National Park in 2004. The park contains dunes over 227 meters (about 750 feet) high—among the highest in North America.

Sand grains that make up the dunes are small enough to be moved along by the wind (a process known as saltation), although much of the dune field is now anchored by vegetation. Winds blow predominately to the east, so that sand in the San Luis Valley (part of which appears at image lower left) is driven towards and piled against the Sangre de Cristo Mountains. The sand of the dunes is mostly derived from ancient exposed lakebed sediments—now the floor of the San Luis Valley—that formed by erosion of rocks in the Sangre de Cristo and San Juan Mountains (located to the west). The action of streams and occasional storms today returns some of the impounded sand back to the valley, where the prevailing winds begin the sand’s migration to the dune field anew.

The dune field has settled in a low spot along the Sangre de Cristo Mountains; the location of snow cover shows the relative altitudes of the mountains. Areas to the north of the dune field (Cleveland Peak and northward), and to the south around Blanca Peak, are higher than the ridgeline next to the dune field, where almost no snow is visible. Since winds are preferentially channeled over the lower parts of any range (hundreds of meters lower here than ridgelines to north and south), sand grains are carried up to, but not over, the low point of the range.

Astronaut photograph ISS016-E-6986 was acquired on October 26, 2007, with a Kodak 760C digital camera fitted with an 800 mm lens, and is provided by the ISS Crew Earth Observations experiment. The image was taken by the Expedition 16 crew, and it is provided by the Image Science & Analysis Laboratory, Johnson Space Center. The image in this article has been cropped and enhanced to improve contrast. Lens artifacts have been removed. The International Space Station Program supports the laboratory to help astronauts take pictures of Earth that will be of the greatest value to scientists and the public, and to make those images freely available on the Internet. Additional images taken by astronauts and cosmonauts can be viewed at the NASA/JSC Gateway to Astronaut Photography of Earth. Caption by M. Justin Wilkinson, NASA-JSC.