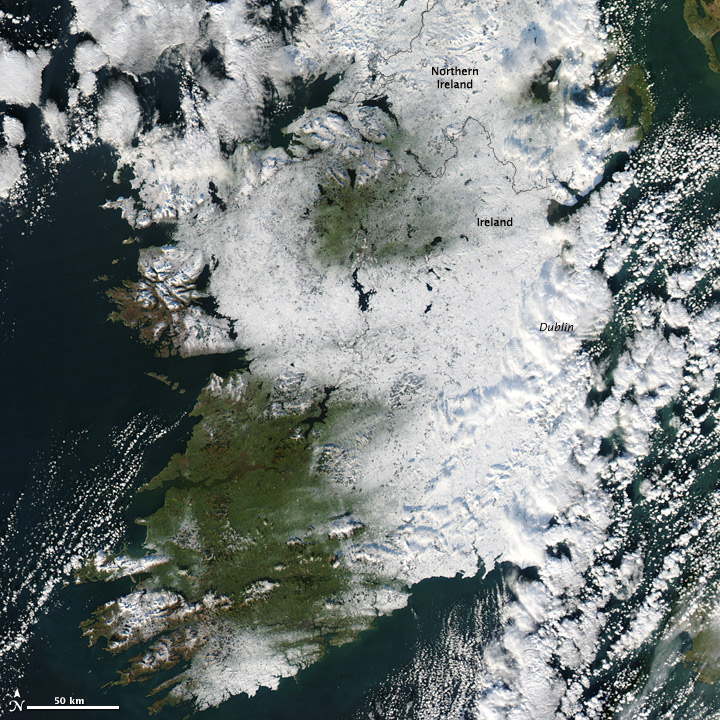 The green gem of northwestern Europe got a coating of white this week, the latest expression of an unusually early and brisk start to winter. Ireland, the United Kingdom, and most of northern Europe have endured record cold temperatures and debilitating snow and ice storms for the past two weeks.

The Moderate Resolution Imaging Spectroradiometer (MODIS) on NASA’s Aqua satellite acquired this natural-color image of Ireland in the early afternoon on December 2, during a rare break in cloud cover. Since the last week of November, Ireland and the UK have been locked in a pattern of record snowfalls and cold temperatures.

Meteorologists at the UK Met Office explained that persistent high pressure over the North Atlantic has been stalling and deflecting the westerly ocean breezes that usually keep the weather mild. Instead, frigid Arctic air has descended upon much of northern Europe. The cooler northerly and easterly winds blowing across the North Sea have been picking up moisture and dumping it as snow and rain on land.

Schools and airports have been closed on several occasions, and roads were clogged with traffic and accidents on the islands and across Europe. Dozens of deaths have been reported from exposure to the cold and from accidents. Temperatures have been 5 to 10 degrees Celsius below average, and dropped as low as -33 C in Poland. More snow and ice is predicted for this weekend in Ireland.

A powerful winter storm hit much of northern Europe in early December 2010.

Snow in Great Britain and Ireland