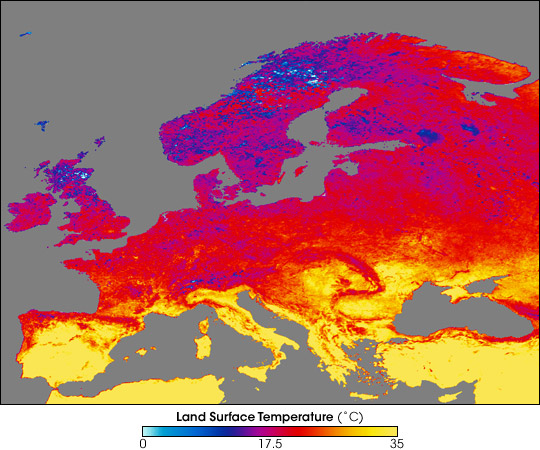 While Southern Europe languished in extreme heat, Northern Europe was chilled with cool, fall-like temperatures during the first week of July. Over 30 people died from heat-related illnesses as temperatures soared up to 40 degrees Celsius in Greece, Romania, and Macedonia. During the same period, unseasonably cold weather dominated much of Northern Europe. In Germany’s Bavarian Alps, the thermometer plummeted to -6 Celsius as snow fell in the mountains and high valleys.

The contrast between the cold north and the hot south is played out in the above image, which shows an average of daytime land surface temperatures for July 3 through July 10, 2004. A strip of yellow from Romania on the western shores of the Black Sea to the Iberian Peninsula marks out the regions experiencing the highest temperatures. Cooler red and purple covers the rest of Europe, with the coldest temperatures across Scandinavia and Great Britain.

Europe’s major mountain ranges separate hot from cold. The Alps cut across northern Italy, their snow-capped peaks forming a line of blue that divides the yellow heat of Italy from the red and purple chill of the lands to the north. In the east, the Carpathian Mountains curve between the red and yellow zones that cover Eastern Europe and the Balkan States, respectively. In the west, a bold red line divides Spain on the Iberian Peninsula and France to its east.

The image was created from land surface temperature measurements taken by the Moderate Resolution Imaging Spectroradiometer (MODIS) onboard NASA’s Aqua and Terra satellites.

On the calendar, Scandinavian summer starts on June 21 in 2008, but summer temperatures had already settled over much of northern Europe by early June. The intense heat and dry weather led to dangerous fire conditions in Scandinavia. Both Norway and Sweden were plagued with several forest fires in early June.