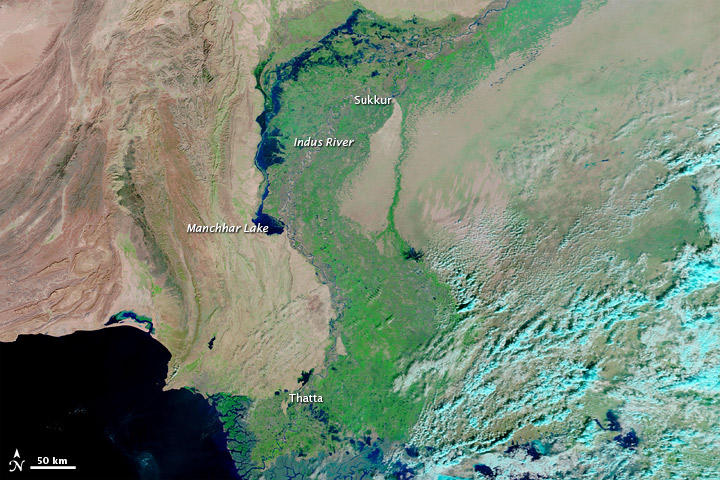 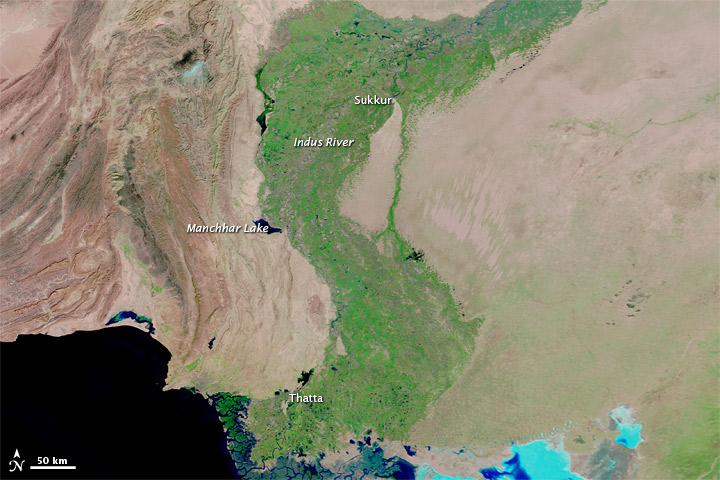 In early November 2010, the director general of the European Commission’s Humanitarian Aid and Civil Protection Department warned that flood water could linger up to six more months in Pakistan. Agence France-Presse reported that evaporation was the only apparent means of removing the water and, depending on depth and climate conditions, evaporation could take months. Large expanses of Pakistan’s southern province of Sindh remained inundated in early November.

Acquired by the Moderate Resolution Imaging Spectroradiometer (MODIS) on NASA’s Terra satellite, these images show parts of the Indus River Valley on November 13, 2010 (top), and November 17, 2009 (bottom). Both images use a combination of infrared and visible light to increase the contrast between water and land. Water ranges in color from electric blue to navy. Vegetation appears bright green. Bare land ranges from pink-beige to brick red. Clouds are pale blue-green.

Exceptionally heavy monsoon rains caused widespread flooding in Pakistan starting in late July 2010. Most of the flooding occurred along the Indus River, but a dam failure north of the city of Sukkur also sent massive amounts of water west of the river, creating a floodwater lake terminating in Manchhar (or Manchar) Lake. Months after the floodwater lake formed, water levels had fallen somewhat. The lake was far from completely drained, however, leaving settlements and agricultural lands underwater. At the beginning of November 2010, the Red Cross warned that stagnant water increased the risk of mosquito-borne diseases such as malaria.